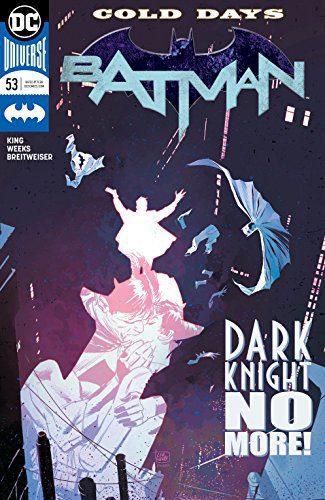 Batman #53 starts back in the jury room with Bruce Wayne speaking in defense of Victor Fries, Mr. Freeze. Bruce does so by appealing to a certain juror’s religious beliefs by mentioning the cross she wears around her neck. Missy, the juror, then asks, “Do you believe in God, Bruce?”

We get insight on Bruce’s spirituality which is somewhat rare in Batman comics. The comic leans heavily on biblical terminology with Bruce referring to Batman’s foes as demons and going as far as to create a Jesus metaphor around Batman himself. Bruce laments, “After my parents died…I sought transcendence. I found Batman.”

Bruce’s argument is a deep insight into his personal psyche and he sees himself. He points out the hypocrisy in seeing Batman as flawless. Within this issue, we see Bruce far more than we see Batman and for the first time in a while, we see the dichotomy between the two, despite being the same person. This issue is also the first time Bruce mentions Selina leaving and it is clear throughout his monologue he is deeply hurt and only properly admitting it.

In this issue and throughout this arc, jury duty has acted as a pseudo-EMDR therapy for Bruce Wayne. EMDR, Eye movement desensitization and reprocessing, is a form of psychotherapy in which the person being treated is asked to recall distressing images while generating one type of bilateral sensory input, such as side-to-side eye movements or hand tapping. It is often used for the treatment of post-traumatic stress disorder. Bruce is forced to come to terms with his actions because he is seeing it through court documents, eyewitness testimony, and his experience.

The entirety of this narrative is beautifully supplemented by Weeks’ art. Week’s art has a classic aesthetic befitting of a Batman comic. Breitweiser uses color contrasts between the jury scenes and flashbacks as Batman to show the differences between Bruce and the perceived “god-like” figure of the Bat.

I thoroughly enjoyed this issue as well as this arc. Overall, this close was much darker and philosophically deeper than I expected. I would love to see more into Bruce Wayne’s understanding and interpretations of the Bible. King has consistently surprised me with intelligence and emotional depth of this comic.