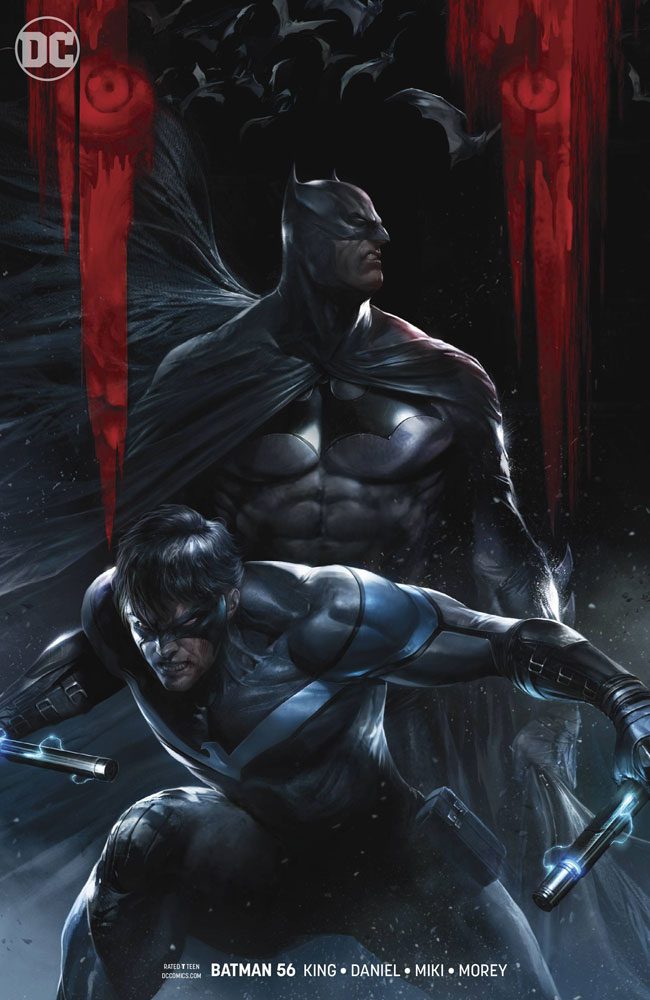 After the not-so-shocking cliffhanger to Batman 55, our Caped Crusader spends the majority of this issue globetrotting in search of KGBeast, which allows a for a few fairly interesting encounters. He catches up to Bronze Tiger, with whom he fights off a bunch of ninjas. Bronze Tiger points him in the direction of New God Kanto, who is hiding out in Spain. Batman threatens to call the Furies if Kanto doesn’t give him the information he needs. Kanto reveals that KGBeast’s father is still alive (and somehow Batman knows exactly where to go after that). All the while, the Beast is in snowy Russia carrying on a reminiscent conversation with his father right before shooting him in the head, which is just when Batman arrives.

This is yet another dull entry in Tom King’s everlasting Batman run that just bashes you over the head with the fact that ‘Bruce can never be happy.’ There is little to no talk of Dick (or Rick, I guess) in this issue, no sense of pain from Batman, just like it never happened, save for an offhand comment here or there. King’s writing is just boring. It’s not fun to read and feels like a chore. I guess this shouldn’t come as a surprise considering we’re 56 issues in and it’s been this way almost the entire time though.

Tony S. Daniel’s art is fairly good. The action scenes flow well together and really show off Bronze Tiger’s fighting skills, which are always nice to see. The biggest problem with the art is the facial expressions, though. Everyone just has a blank, bored look on their face, except for Kanto, but even his expressions aren’t much. It matches the dialogue surprisingly well though.

Overall, the dialogue and story were incredibly dull, with the art helping improve where the story lacks, but not by much.