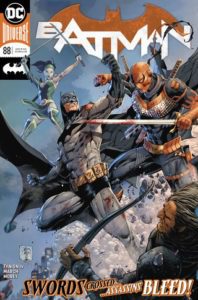 The rogue vs. rogue storyline continues in Batman #88 as four of the Dark Knight’s foes in Riddler, Penguin, Deathstroke, and even Joker find themselves part of a plan formed years ago. The implications of this plan will test not only Batman but Bruce Wayne as well.

The key part of this issue is how this plan affects Batman’s relationship with Catwoman. The relationship between the two has been muddled especially given their developments in the recent past. Catwoman’s attempts to find her path of redemption in her relationship with Batman is all but doomed with this mysterious plan she helped put together coming back to haunt her.

Her past as a criminal damaging both her future and relationship with Batman is hardly an original concept but the mystery surrounding what role she had to play in it and her desperation to derail it now is what keeps it fresh. The first few pages of the issue deal with Riddler and Catwoman discussing the relationship between her and Batman and how this plan affects it.

Riddler serves as a grisly, both metaphorically and literally,reminder of the criminal-types Catwoman used to work with and how despite her best efforts and intentions, that will always come back to her.

Although the mystery of who “The Designer” is didn’t make much headway, Batman #88 reveals enough to leave readers satisfied with the story progression and includes an action scene involving Batman, Deathstroke and the Penguin with a shocking end. Throw in a surprise villain entrance and a classic Lucius Fox moment and the latest issue of Batman ends up being a solid addition to what has been a great run so far.