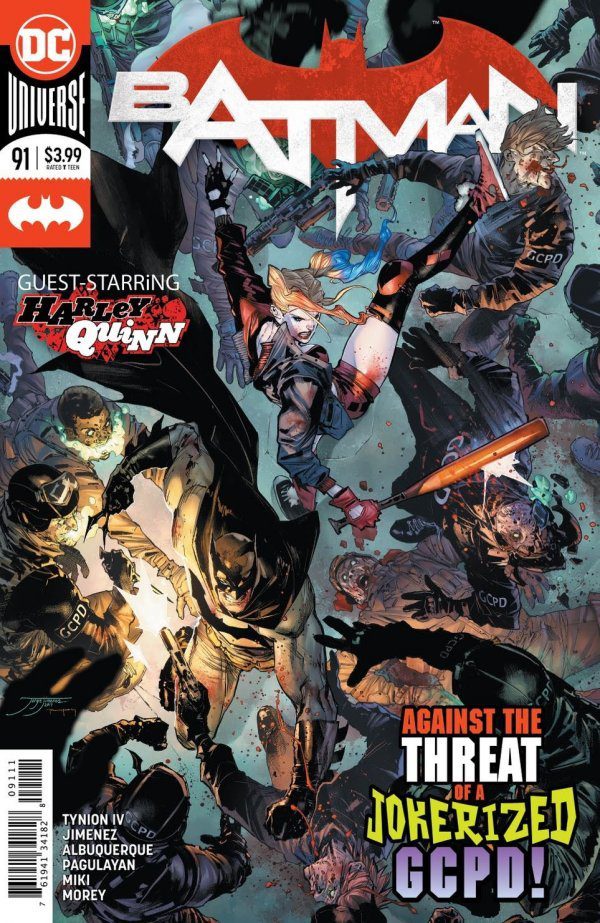 Building upon the story from the previous issue, we see how the Designer gathered four of the top criminals in Gotham to develop their master plan. We see how things are slowly played out from that meeting. We are also left wondering if Joker really killed the Designer or if Joker is secretly him? The uncertainty in all of this has pushed Batman to question how The Designer was able to plan ahead and who they really are.

Now the problem with that is the story isn’t going anywhere. You have all these characters and subplots and they are going nowhere. Catwoman and Harley are teamed up, Batman is fighting Slade, Joker is doing god knows what and then the Designer just randomly appears. Yet none of those plots make any sense being jammed into an issue. The story needs to flow forward but this is too convoluted and feels forced to include everyone.

Tynion IV is doing too much and seems to try and wrap up the story to get to the next story arch. It shows that in the previous issues he has no problem flushing out the characters the purpose and reason. In this issue we just get a frantic race to an unknown destination and a made up finish line.

If the story was a jumbled mess, the art isn’t too far behind. Having four different artists doesn’t make for a cohesive story. You can see styles change from page to page as artists change from panel to panel. With this mess, it’s an equal blame across the board for everyone involved. Now there are some stand out panels and sequences, but they are jumbled with all the rest that it’s easy to miss.

Batman #91 was a weak entry in the Their Dark Design story line. I don’t see the need to rush it and it might be worth going monthly to allow the artists to relax and not rush to meet deadlines. Sadly this issue falls flat and hopefully with the hype of upcoming books they don’t suffer the same fate.