Batman and the Signal #3 Review 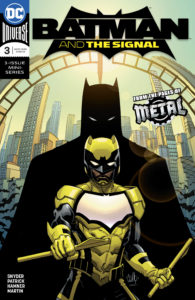 Batman and the Signal #3
DC Comics

As the sun sets on Gotham, the Bat-Family is in the thick of the action as an army of Metas are rioting in the Narrows. As the team takes on the rampaging metas, Batman makes his way to the scene and contacts The Signal. The two find each other and Signal wants answers about what is going on and why Gnoman wants him. Batman tells him to think about his training. It’s a good moment that calls back to the events of Metal and shows a change in Batman and how he handles the members of his team. 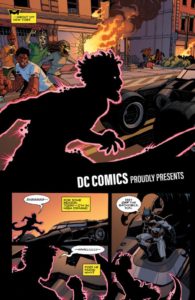 The third part of this limited series shows Duke come into his own as a hero. Something I’ve been waiting to see since before the events of Metal. It’s was good to see him question the reason why he was chosen and Batman gave him the answer that he needed. The removal of Duke’s self-doubt does a lot to give the character more focus and purchase in this issue and hopefully, in the future. Gnomon’s presence showcases an interesting wrinkle in Duke’s story. One that has the ability to alter his history, but also help define him more as a character.

The immediacy of this issue is one of the things that makes this series work. The writer gives the reader time and space to understand Duke, his powers and his world. It also does a great job of establishing a world for Duke in the daytime of Gotham that he can operate in outside of Batman. The story started in this series is definitely one that could sustain an ongoing series if it keeps this same tone and expands on the daytime world of Gotham. The only drawback to the series being this short is that the aftermath of the arc needed to be shown. I would have liked to have seen the aftermath of the metas and more dealing with the Narrows, but there is a lot of great narrative in this story that could sustain another new story.