Look, the Joker is insane, but he isn’t stupid. That pretty much seems like a given. So the fact he can’t figure out who “Bruce” is on his own is absurd.

That’s also ignoring the fact that in Batman Beyond #28, right before the Joker said Robin needed to tell him who “Bruce” was or he’d die the Joker said, “Just like I did with Wayne’s new tower.” The context doesn’t matter, and him saying “Wayne” instead of “Bruce Wayne” is alright, until the very next page he says, “…the man named Bruce!” the very next page. Him not figuring out who “Bruce” was right away is believable, but “Wayne” and “Bruce” close together like that and the Joker not at least throwing the idea out there simply isn’t believable.

The only way Dan Jurgens can justify it is if Joker someone says in Batman Beyond #29 “I suspected it might be Bruce Wayne,” or “It can’t be that old fact cat Bruce Wayne but he’s the only Bruce I know!” something along those lines.

The rest of Batman Beyond #28 was good. The back-and-forth fighting between Terry McGinnis and Joker Beyond—who’s real name is Johnny and is, kind of, still alive—was fantastic. This juiced up Joker made life miserable for Batman, though the latter absolutely got some good licks in.

Plus we get some pissed off Dick (not Ric) Grayson. He’s not exactly a fan of the Robin program and putting kids in danger like Bruce does. And how about Bruce’s line when Grayson questions him about Matt McGinnis, the new Robin? “He’ll be fine. He has to.” He “has” to? Tell that to Jason Todd or pretty much every other Robin through the years, Bruce. It’s comments like those that make you wonder how he’s survived this long. 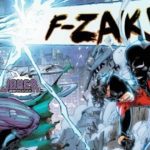