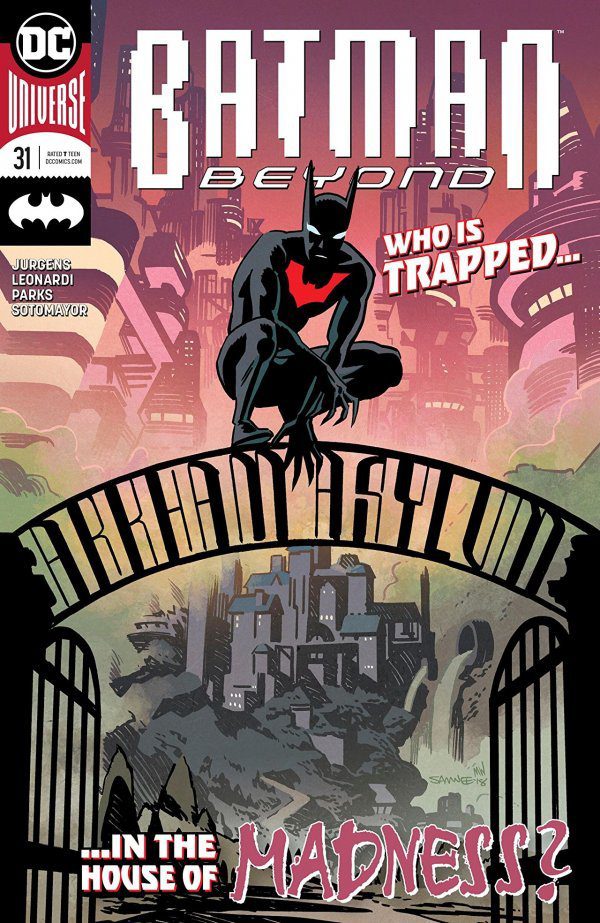 Dan Jurgens really threw readers a curveball in Batman Beyond #31. At first, it seemed like Bruce Wayne was making an innocuous visit to Arkham Asylum. Something of a check-up. The moment the power goes out at Arkham, Bruce disappears for a brief period, much like he always did as Batman. But as he warned Dr. Sheehan when the lights first went out, “It’s possible this might be something more.”

From there we see a huge change in Bruce. He’s drinking as soon as he gets to his car and keeps the party going when he returns home.

From there, he makes a point of responding to Matt McGinnis’ statement, “I never get tired of going’ down to the cave!” in reference to the Batcave. Bruce replies, “That…makes two of us.”

At first, this seems like a throwaway comment. The trip to Arkham could have led to him missing his days as Batman. Then he reacts oddly to Terry suiting up as Batman. Again, could have been him pining about when he was back in his prime.

But the kicker in it all is the end when Terry is about to get his spine torn from his body by a gravity chamber. The normal Bruce would’ve been all over that before Splitt — who we’ll get to in a sec — could start up the machine. Instead, when Matt asks Bruce what’ to do, he says, “No idea.”

Then we see a patient at Arkham who’s wrapped up like a gordita, screaming he shouldn’t be at Arkham, though he doesn’t know who he is. We can’t see his face, but there’s a very good chance that’s the real Bruce Wayne.

(Note: What’s next is a guess at the fake Bruce’s identity. I don’t know idea who it is; this is all simply my own reasoning. If you’re worried about this somehow spoiling the reveal, whenever that may come, do not read ahead.)

Who is this faux-Bruce? Is there a chance it’s Hush? Or at least a Hush clone? In the past, he’s taken on the appearance of Dick Grayson. During the Batman-Catwoman wedding event, he had received plastic surgery to look like Nightwing, so there’s a chance he’s done what he can to look like Bruce now (despite being lost in another dimension at the end of Batman: Prelude to the Wedding: Nightwing vs. Hush.)

Other than that, maybe it’s Clayface? I feel like Everyman is probably a stretch, but who knows?

Terry finds himself up against a unique villain in Splitt. He’s actually two people in one. When morphed together, Splitt’s helmet looks just like Deathstroke. (I thought it was Slade Wilson or something like a “Deathstroke Beyond.”) But these two are definitely not Deathstroke, but still dangerous. Their weakness seems tough to exploit, though doable based on their difference in personality. But Terry has one other major issue to deal with before figuring out how to stop this twosome.