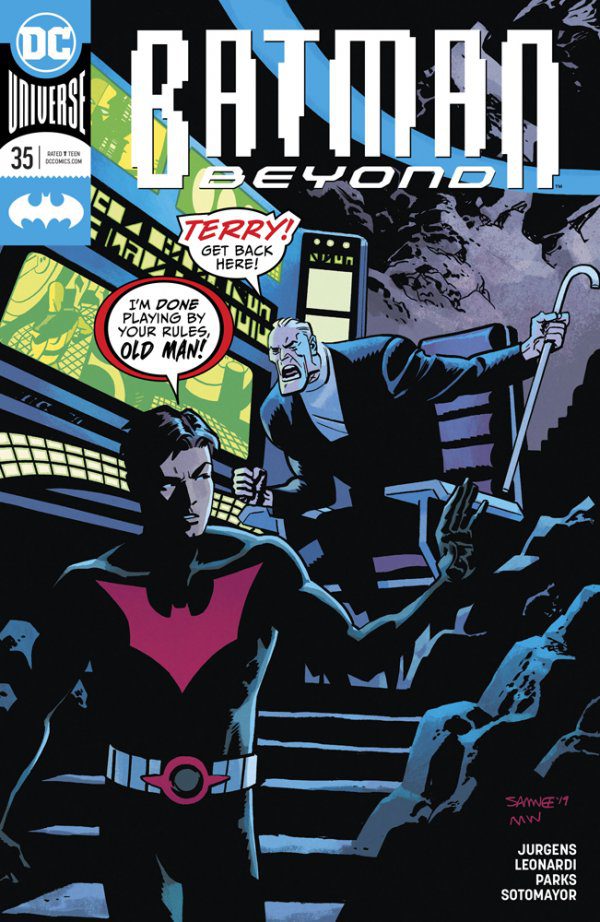 (Spoilers for Batman Beyond #35 ahead.)

Pretty much any movie or book that includes a well-executed twist is going to up the story’s stock a bit. This was exactly the case with Batman Beyond #35. Outside of the twist, the surprise at the end was the only other noteworthy part of this issue. The action was decent, but nothing crazy.

So we already knew Splitt was two people who could morph together into one body. In fact, we knew they had to do that. Being separated for too long would kill them.

What we did not know, is they were born this way.

There are some villains have one major incident that they deal with in their lives that sets them down the wrong path. Then there are others who’ve had a miserable existence from the start. Splitt is definitely the latter of the two. Their existence up to this point is pretty miserable.

And it’s not like they could go ask someone for help. Imagine if they went up to someone and explained their situation. Who’s going to offer them help besides an evil genius? Unfortunately, anyone who would know how to help (i.e. Bruce Wayne) generally isn’t easily accessible.

Hopefully, Bruce can help these guys out.

The Flash’s appearance was awesome. He certainly aged well. Probably had some help from the speed force.

My major gripe came in the middle of the issue. When we see Terry McGinnis, he encounters a couple of cops. They scan his face to search him in their database. The image looks much like the Terry we’re used to seeing. But in the panel above, he looks like a completely different person! Not sure how that happens. I complained about something similar in my review of Red Hood: Outlaw #37. A major pet peeve of mine.

Last thing: Chris Stevens and Sunny Gho’s variant cover was great. Best Batman Beyond cover in a while.

Batman batman beyond Bruce Wayne comics DC comics flash terry mcginnis The Flash
Are you an Insider?News, reviews, & updates are just the beginning.