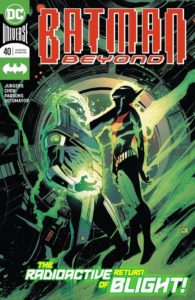 (WARNING: Spoilers for Batman Beyond #40 ahead.)

Dan Jurgens did an excellent job of holding off on the Batwoman reveal. He didn’t tip his hand until very late in Batman Beyond #40, though he did make it clear the two candidates we initially expected — Melanie Walker and Barbara Gordon — were not Batwoman.

Who he chose came out of Left field. She still makes a lot of sense, for some obvious reasons. But there wasn’t a way of seeing this coming — until Jurgens wanted readers to know exactly who Batwoman was.

It’s unclear whether or not Bruce will figure out who Batwoman is. There are at least two breadcrumbs now, but those don’t mean much without further context.

(Quick side note:  We’re in spoilers, but the two significant, new characters we see in Batman Beyond #40 will not be named in this review, in case you haven’t picked up on that already.)

With the mystery of Batwoman still in front of Bruce — along with the second issue presented to him, which he doesn’t realize is related — it seems like Terry McGinnis is going have a face-to-face interaction with Batwoman before anyone else.

And who knows how that could impact Terry and Melanie’s relationship — assuming Terry every gets his memory back.

All in all, Jurgens has taken the title in the right direction with the Batwoman-Terry stories. Hopefully, he and Sean Chen can maintain the momentum from Batman Beyond #40.