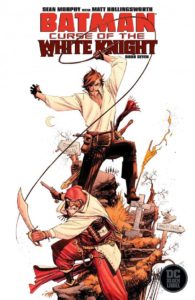 (WARNING: Spoilers for Batman: Curse of the White Knight #7 ahead.)

Sean Murphy has put Batman though a lot. That’s what made Batman: White Knight so good. Same goes Batman: Curse of the White Knight.

Batman is at his best when he’s like the rest of us — lost. It’s fascinating to watch the man with all the answers to work through so much confusion like a normal person.

All that being said, Batman: Curse of the White Knight #7 was still surprising.

Because, he actually did it. Batman actually revealed his secret identity to all of Gotham.

He’s thought about doing it for a while, but for him to actually make the leap, well, that’s still astonishing.

It’s one thing when he tells a contemporary or something of that ilk, but telling millions of people is a big step. And the idea of Batman revealing his secret identity has always been laughable. Maintaining that level of secrecy has always been vital to what he does. Plus, Batman saw what happened when Batgirl’s identity was revealed earlier in the Batman: Curse of the White Knight series.

Have you seen this:
Daredevil: Woman Without Fear #1 (REVIEW)

By taking that route, Murphy has so many ways he can go with the story. Batman could do something else always thought unfathomable — kill someone. He could retire from crime-fighting when he completes the mission. Or, who’s to say Batman will definitely survive this whole ordeal? Why should we trust Batman is safe so long as Murphy is in charge? Everything up to this point has indicated Bruce Wayne isn’t safe in the pages of Batman: Curse of the White Knight.