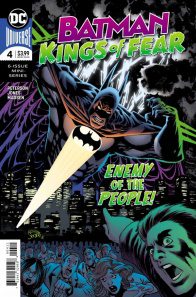 Batman Kings of Fear #4 was pretty heavy. Scarecrow dug real deep with his Windex powered gas to force out Batman’s most personal thoughts. The two main thoughts being: Batman’s motivation for being Batman and his true love.

Now, we all know Bruce Wayne’s motivation for becoming Batman started with his parents being murdered. But it always seemed like he kept up the work to help make Gotham a better place because his family cared so much about the city. Which is still part of why he works as Batman, but Scarecrow got Bruce to reveal another reason.

He does it so no other child will go through what he did when his parents were killed. It makes perfect sense when you think about it. However, it’s impossible to achieve, which he admits once Scarecrow points that out.

Have you seen this:
Nailbiter Returns # 8 (REVIEW)

Yet, Scarecrow did mention there might be a way for Batman to save those children, he just needs a different approach. He wouldn’t explain further, but I expect to learn more in Batman Kings of Fear #5. 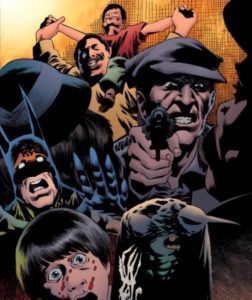 Which brings us to the reveal of Batman’s true love: Gotham. (Not exactly a shocking.) Scarecrow has led Batman to believe Gotham is better off without the Caped Crusader. The city could thrive and develop and be a much happier place. What Batman has lost sight of in this overwhelming hallucination is this isn’t fact, it’s his fear playing tricks.

Scarecrow will undoubtedly use this fear against Batman soon. More than likely, he’ll play at his motivation to protect the children. Maybe he’ll try to persuade Batman into quitting in order to make Gotham a safer place for families to live.

Scott Peterson has done an exceptional job with this story and it’s pacing.