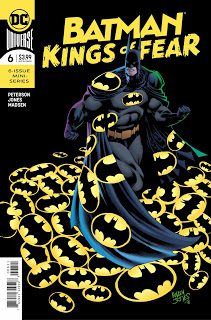 Now, Gordon and Alfred’s story were pretty much expected. They’re Batman’s closest accomplices. The most interesting story came from the Arkham doctor. While things went a big long, she did illustrate how great an impact Batman has on the majority of the criminals he’s dealt with. What’s most interesting is the recidivism rate amongst criminals who’ve been stopped by Batman. It’s only two percent, as opposed to the general rate being over 40 percent, generally. Take all the personal stories out of this issue. This number should have been all Batman needed to hear. But because Bruce Wayne is the way he is, it took Alfred’s statement, in addition to everyone else’s, to set him straight.

Now, the doctor’s story about her husband was a bit on the long side of things. Though I’m not sure what Peterson could’ve done if shortened the life story of Scalpel Sanchez, it seemed to dominate things. She does, however, bring up the very valid point that the criminals in Arkham are the minority. Most people do fear the Batman, leading to the abandonment of a life of crime. Readers get caught up in that because those are the only stories writers share. But Gothamites do the same, and they shouldn’t. The doctor’s explanation of the recidivism rate is a sound metaphor once you take a closer look at it.

Peterson did very well with Scarecrow in this series. He forced Batman into this insane soul-searching experience that any reasonable person in his position could believe. (Maybe not the part about all the villains being great people, but certainly the part about Gotham thriving.) He’s such a dangerous character and can easily be underwritten, but Peterson certainly didn’t do that, which made this series a good a good read.

Have you seen this:
Ricky Mammone, Writer of Second Chances from Image Comics: A Friarside Chat