Batman: Prelude to the wedding – Harley Quinn vs The Joker REVIEW 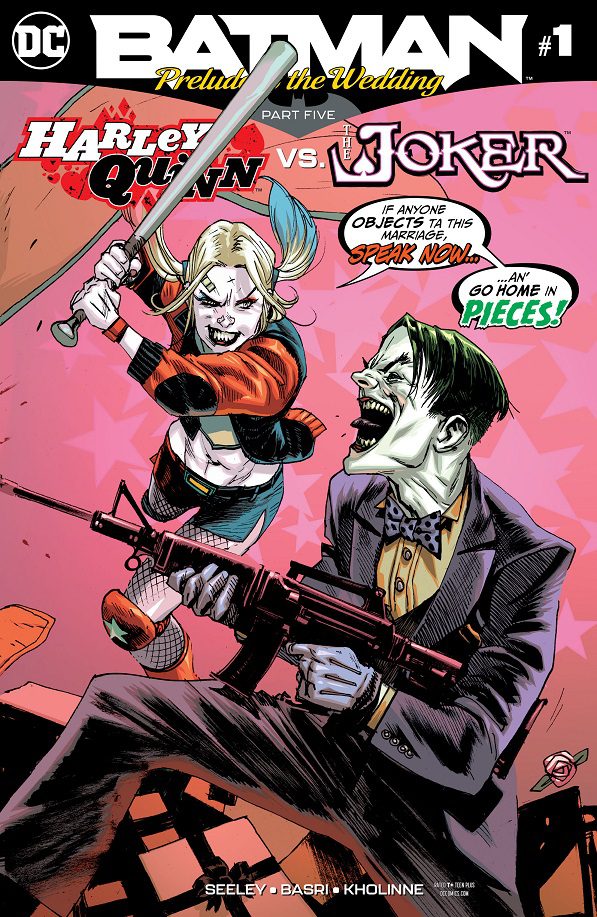 Batman: Prelude to the Wedding - Harley Quinn vs The Joker
DC Comics

There’s only a week left till we get to see Gotham’s Knight and Thief walk down the aisle. This final prelude before the big day arrives pits Harley Quinn against the Joker. Harley has located Mr. J with the help of the Riddler following his tangle with Batgirl. She plans on showing him what life being the victim is like and has devised her own plan to make him suffer. Will Harley ever stop him clowning around? Or is it time to say for them to say till death do us part?

This issue is primarily a story exploring the relationship, both past, and present of the two characters. Harley Quinn has located the Joker in an old part of Gotham used previously for the cities villains death traps. She takes him hostage with the intention of showing him what life has been like for her over the years. I personally love this when the writing is focused on Harley and the scenario is the Joker being the Joke. Harley’s fun to read in this issue and the two are arguing throughout. It’s not all dark this is Harley Quinn and The Joker and each look at the relationship is matched by well-timed humor. Harley’s entrance in this issue is just an example. The attention flips between the characters, having Joker being subjected to Harley’s torture and Harley reciting her plan. The pages with Joker being swallowed by puddin’ show just how intelligent Harley is and that she’s the real threat of the two. I love to see this side of Harley back as it’s here she shines the best in my opinion. The issue itself is split into three sections: Joker and Harley’s entrance: Pudding death trap: The end encounter.

The issue did a fantastic on of leading me on a false sense of security. I wasn’t particularly interested in what the Joker had to say early on and my attention was more on Harley. By it’s closing pages it becomes apparent why this was written this way and I applaud  Tim Seeley’s writing. It’s something I should have seen coming and yet I didn’t. Hearing the two “compliment” each other as they do in this issue was a highlight. It’s a twisted kind of banter throughout felt amidst them swinging axes at each other. Harley wants to see the bat and the cat get married to fulfill her own fantasies of a happy ever after. The Joker just a wants an invitation to cause chaos. The two play back and forth with mind games until the final plan is realized which I won’t spoil.

The outfits Harley wears in this issue are some of the coolest I’ve seen her in for a while. I’m a fan of the art by Sami Basri, the art feels alive and the design of both characters are superb. There’s also a brilliant closing epilogue by Otto Smidt. Overall this is a fun ride of a prelude before the wedding we’ve all been waiting for.