Batman: The Complete Animated Series Deluxe Limited Edition‘s release date has been pushed back to October 30, 2018. The anticipated Blu-ray™ will now include a Digital version of the series. This is the first time since it’s broadcast from 1992-1995 that it will be remastered. The Blu-ray™ box set available from Warner Bros. Home Entertainment and DC Entertainment will be $112.99. 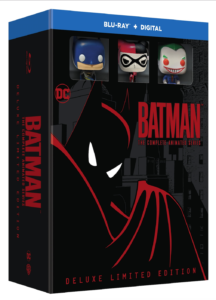 The box set includes all 109 episodes, two bonus disks containing the recently-remastered animated films Batman: Mask of the Phantasm and Batman & Mr. Freeze: SubZero. In addition, the box set’s premiere bonus feature is The Heart of Batman, an impressive 90-minute documentary on the making of Batman: The Animated Series that includes interviews with nearly three dozen members of the cast and crew, detailing the intricacies of production behind the landmark animated show.

The Batman: The Complete Animated Series Deluxe Limited Edition package altogether features approximately 2,700 minutes of entertainment spread over 10 Blu-ray™ discs, not including the two bonus discs and the 11 specially-selected episodes with audio commentaries by cast and crew. The box itself will include a three exclusive Funko Pocket Pop! vinyl figures of Batman, the Joker, and Harley Quinn and seven beautifully-designed lenticular art cards. The box set is housed in a layflat-book with a  slipcase.