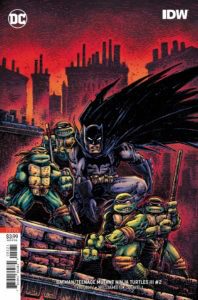 The original Raphael has a lot of information to share with Batman and the Turtles of his world. Did not see any of that coming.

James Tynion IV incorporated a lot of Scott Eastman’s TMNT throughout the course of this book. The way he did it, I legitimately said out loud to myself, “What are we doing?” But he didn’t disappoint. Every ounce of information he gave the readers was necessary because Tynion is providing the info through the original Raphael, who’s trying to educate Batman and the Turtles.

Batman/TMNT III #2 clears up a lot of the questions from the first issue. Though, Tynion just gave us a new set of things to think about for another month.

(Spoilers ahead if you haven’t finished Batman/TMNT III #2.)

As stated in the first portion of the review, Raphael gives everyone an understanding of why Leonardo is dressed like Nightwing and so on. It’s all Krang’s doing. Somehow by merging those heroes together, it makes it easier for him to take over his universe.

The original Raphael needs help from Batman and his TMNT “brothers,” but couldn’t this have negative repercussions for them, too? Will they still exist once they defeat Krang, or would their world need to be eliminated to end Krang’s conquest of multi-dimensional domination? Because that’s a tough ask if Raphael expects the TMNT and Batman to just end their own world.

(One last, little thing: this title has gotten absurdly long. Like, the actual name of it. Batman/TMNT III (insert issue number here) is a damn mouthful I don’t enjoy repeating when recommending this book to people.)