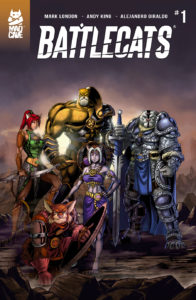 Battlecats is an all-original medieval, fantasy epic created by Mark London. The story is set in the fictional realm of Valderia, an elaborate world shaped by both its rich history and diverse cultures. The Battlecats, led by Kelthan of Stormholt, are an elite team of warriors sworn to fight the forces of evil which have set out destroy the tradition and ideals of Valderia. Generation after generation, potential Battlecats are chosen from an early age and trained to one day protect the mandates of the Lion God, the realm, and the crown.

Books 1-5 comprise the tale “The Hunt For The Dire Beast” and serve as our introduction to the world of Valderia. I’ll admit, at first the story left me feeling a bit lost and disappointed. However, by the time I finished #5 I knew Mad Cave Studios and Mark London had brought me another GenXGrownUp pull list addition. The story centers mostly around the Battlecats as the title suggests but it is evident that a rich history has been developed to support the tale. Medieval in style and tone, the pages bring you multiple viewpoints and a few unexpected twists that will leave you wanting more.

I always like to discuss the art which accompanies the words of any comic. With Battlecats being my second Mad Cave Studios series in as many weeks I can tell you this: the artwork is stunning! The panels are gripping, frenetic, and emotional in exactly the right proportions. The colors are bold and bright in the perfect way. Anytime someone asks me, “Why do you read those kiddie books? Why not just read a novel like an adult?”, this is the type of art I show then as my explanation. Another interesting aspect of the images in Battlecats is how similar they are in style to Knights Of The Golden Sun. It seems as though Mark London and the Mad Cave crew have a definite vision for their books and they make sure each series falls into the Mad Cave frame.

I could go into great detail about the story but I think it would be better for you to pick up a copy and join Kelthan, Kaleera, Vaela, Mekkar, and Zorien on their quest to hunt the Dire Beast at the behest of their King Eramad III. Raider wars, magical beings, and dark betrayals await you in the Mad Cave Studios series, Battlecats.