Bendy and the Ink Machine

Bendy and the Ink Machine is a survival horror game that first began making the rounds on Game Jolt in early 2017. A little over a year later, this quirky title with a 1920’s cartoon aesthetic has taken the console world by storm.

Set in the abandoned Joey Drew Studios, players control Henry as he revisits his old workshop after receiving a mysterious letter from his former boss. When Henry arrives at the workshop he finds the Ink Machine, a large device that spews black ink and has a connection to the occult. After becoming trapped in the labyrinthine studio, Henry learns that he is not alone. In the shadows lurks Bendy, the central character of the Joey Drew Studios universe. Can Henry escape the grasp of Bendy or will he be stuck in the nightmare of his own design? Check out the trailer below:

Bendy and the Ink Machine blends first-person gameplay with puzzle solving to guide players through environments overflowing with terror. The gorgeous art style harkens back to the days of Steamboat Willie and Felix The Cat, but instead of happy animals, we are constantly startled by the sinister grin of Bendy as he pops out from the shadows. Similar to the other episodic series such as Life Is Strange or Alan Wake, Bendy uses its short levels to advance the narrative in interesting ways. 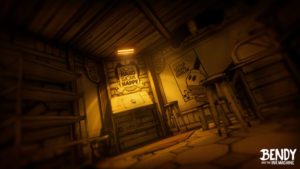 Exploration is key to the game and is required to advance through each area. There is occasional combat, however, it’s only there to add brief moments of action to what is otherwise meant to be a slow experience. Henry’s actions are limited, as is his speed, and this forces you to marvel in the dread. With five chapters, the game clocks in at under two hours and intends to use every minute to pull you deeper into its the world of Joey Drew Studios.

Unfortunately, Bendy and the Ink Machine is somewhat held back by its poor technical performance on the Nintendo Switch. Textures are often blurred and edges can be jagged, an issue that is exacerbated by the shaky 30FPS frame rate. This is an issue when the game’s purpose is to keep players immersed in the tense environments. I’d often find myself in a tense situation, only to be torn out of it by dropped frames and blurry visuals. Its a shame this is an issue when the design of the game is so well done. One can only hope that there are patches forthcoming to fix these issues.

Developer theMeatly Games knew exactly the type of game they wanted to make when they started Bendy and the Ink Machine. Both the genre and gameplay are quite similar to Five Nights at Freddy’s. The world building is done from objects such as books and tapes found within the game instead of lengthy cutscenes, allowing the players to slowly emerge themselves in the world. As players delve deeper into the dungeon of the workshop, jump scares and creepy flickering lights lurk around every corner. Fortunately, the faithful execution of the formula is perfectly paired with the game’s twisted visual style and Bendy delivers on its promise of captivating episodic horror.

Bendy and the Ink Machine is available now on  Nintendo Switch, Steam, XBOX ONE, and PlayStation 4. A mobile spin-off, Bendy in Nightmare Run!,  is also available.