This might be a me-thing, but I found the ending to Black Panther v. Deadpool #3 a bit confusing. Not the whole Deadpool shooting Jack O’Lantern in broad daylight part, that’s pretty straightforward. The part where T’Challa said his mother was wrong and then follows up with, “As long as there is evil in this world that cannot die, there must be someone here to stop it.”

Didn’t Ramonda essentially tell T’Challa to consider taking the cure once the opportunity presents itself? (Or right away, it’s still not fully clear how this antidote works.) That sure felt like the message she was trying to get across and that pretty much goes in lockstep with what T’Challa said to Wade right before he blasted Jack O’Lantern’s head off. (And there’s a chance T’Challa tries to save Jack O’Lantern with his new cure next issue.) There’s a disconnect somewhere along the way in all this, even though it seems pretty cut and dry.

Although, this is something that T’Challa should be careful about when it comes to revealing it to the world. As much as you want to help and save everyone—and definitely use this to rid the world of its terrible, awful diseases— this would be very, very bad in the wrong hands. At the same time, how can you have that cure and not help, literally, everyone? It’s a tough call and something says Black Panther will keep this thing in-house.

So he’s got the weight of the world on his shoulders, while Deadpool is getting his arm back and, per usual, not thinking straight. There’s no way he thought Black Panther would be OK with him killing Jack O’Lantern. He must have known that’d send him over the edge. His actions point to the contrary, but not even Wade Wilson could be that dumb, right? 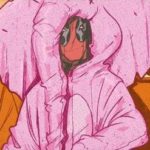