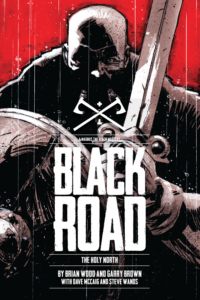 Black Road pulls no punches. From the start it is a brutal, violent, and non-stop ride of a story that does not allow the reader, or the characters, to rest. The story follows Magnus the Black - a man with no god who survives in a country torn apart over religion. Although he toes the battle lines drawn in between Christians and Pagans in his Norssk homeland, he assumes no side, taking Christian money as easily as Christian lives. The full story reads better all at once, and I imagine if I had been reading this in issues I might have judged it too early, but as a whole, the entire book holds the narration together in a way that is both deeply sad and full of extreme tension.

Magnus begins by agreeing to accompany a priest as he travels to Oakenfort, the heretic Vatican in the North, which seeks to supplant Rome as the seat of Christian power in the world. While he cannot protect this priest, the kindness of the man impels Magnus to follow through with the journey, hoping to find answers at Oakenfort to questions posed early on in the book. The story is compact but allows space for the characters to describe their histories, usually through flashbacks, with little dialogue between them. There are things unsaid in between panels, and our focus is clearly on Magnus as he narrates the events, surroundings, and battles of both past and present.

The overwhelming harshness of the narrative is reflected in the style of art. The lines are thick and thin, brushed on with both care and expression, allowing some lines to remain unmade. The characters and background are filled in by the restricted tonal palette of the comic, mostly blues and grays, shades of dark browns and greens occurring on clothing and in settlements. The bright orange and red sparks of fire, flame, and devotion are usually only seen in flashbacks. In the current story, greed and corruption take on the colors of passion that were used in flashbacks to denote innocence and simplicity. It is as if the colorist is showing echoes of the past within the story, explaining how different events repeatedly shame and traumatize Magnus through his life.

A capture from a flashback. Bright oranges, reds, and yellows show the intensity of these memories, and the colors carry violence and emphasis forward within the pages.

Women in the narrative are never treated as tools or objects, which was a huge relief, as I knew little about Black Road except that it was set in ancient Nordic countries. I went into this trade with few expectations and was glad to see that not only were there women, but they were a diverse people who had their own opinions and motivations, outside of the wills and whims of men. Magnus is solidly our main character, but much of the wit, friendship, and camaraderie that creates a reader’s investment in Magnus comes from his relationships to the women in the story.

The exception to this is his wife, who serves as a constant emotional reminder of his failure to protect her, and by extension, all of the Northland. I had a hard time thinking of his wife as a person, as I don’t believe she was even named. This use of a wife as an emotional catalyst felt hollow at times, but as the story went on, it became more obvious that his wife represented more than marital comfort, and she rarely took on that role. Instead, the character was developed into a metaphor for peace, and the hope Magnus carried of a preserved Norssk, and a safe homeland. The scenes following up to her death and her burial were repeated throughout the trade, and the repetition of these scenes with different information being shown each time added to the sense of trauma, isolation, and sadness that Magnus embodied as he pushed on through the narrative.

Magnus is not a gentle giant. He’s no mindless brute either, and like much of Black Road which deals in divides and double natures, Magnus reveals his reasoning and understanding page by page. His emotional ties become our emotional ties, and while few and far between, they are delicately rendered in a way that feels real and natural to the story. He is protective of those that show him kindness and is shown to forgive those who do not. Above all, he wishes for some semblance of peace and knows that killing is not the way to go about getting it.

The book, like Magnus, is straightforward and blunt. The mystery teased on the back cover is not the driving hook of this story, rather Magnus is. He is why we care, and he is the heart of Black Road. In the end, I cared deeply about this man. He was truly the only reliable person in the story, and it was his sheer determination and his reason that won me over.

My biggest regret while reading Black Road is that it didn’t go deep enough into the psyche of Magnus. So much time was focused on fighting and action that we lost opportunities to understand why Magnus loves Norssk so much. It’s apparent he’s willing to do anything, even becoming an outcast among his own people, if it means he can preserve the Northland. It’s his home, yes, but what else? He has few friends, no family, and his emotional arc begins and ends with the death of his wife, which happens before the events of Black Road. He does not change as a character and is not shown to be motivated by revenge. So why does he care about Norssk? What is it besides a harsh land that he calls home?

The art of this book is truly incredible. Both the colorist and the artist create landscapes that are bleak and evocative while still remaining detailed and densely packed with information. The beauty of Norssk is a stark contrast to the ugliness of the conflict that surrounds it, and because we are seeing most of this from Magnus’ eyes, it is in these pages and panels that we can come close to understanding why Magnus cares so much about Norssk. Again, it is not explored enough, not pushed enough, and the action is so incessant that we don’t get to fully appreciate the northland as Magnus states he does.

An example of the gorgeous landscapes we see in Black Road.

The story was well paced and brilliantly crafted, the characters intense and full of heart, the art was perfectly suited to the story, but I wonder what Magnus has achieved. Has he found a way to create a better world for his homeland and his people? Or is he doomed? Perhaps we don’t need these answers, or perhaps the book doesn’t demand them, but at the end of the story I want Magnus to know peace, and I hope that he finds it in his future.

I also know, like some priest or pagan who gains knowledge from reflection or rune casting, that Magnus the Black is not a man to whom rest comes easy.