Arc System Works have been on quite a roll recently. With the major success of the 3v3 fighting game known as Dragonball Fighter Z. They now have brought us not only a 2v2 tag team fighting game, but it’s also a big crossover with three other series. Blazblue Cross Tag Battle brings us characters from Blazblue, Under Night In-Birth, Persona, and RWBY (Ruby). I have only played a couple of the Blazblue games, and only a couple hours spent on Under Night In-Birth. I’ve never played the Persona fighting games and RWBY is new franchise joining this genre in the video game world. Many will know the four girls from RWBY from the hit web series of the same name from Rooster Teeth. The game has a simple five-button battle system. Three are used for attacks, one is to call in an assist, and one is to tag out. This is quite different from other fighting games I’ve played but I found it really easy to dive in and learn the mechanics. The tutorial provided in it’s Tactics Mode will teach you the basics along with learning character specific specials and simple combos.

Your health bar when down will have red bar following it so if you tag out, that portion of the bar will slowly refill. Tagging is essential as matches can end very quickly. At the bottom you have whats called a Distortion Gauge. This is like your special meter that will go up to five bars and is used to do characters specials and supers (Distortion Skills) and will fill up as you land attacks and take damage. The blue bar next to that is the Cross Gauge and is just two bars long. Using an assist takes one bar and it will refill on its own. The 4 diamonds next to your cross gauge shows your teams synergy. When landing a Clash with your partner, this will fill up all four slots. It takes 6 of these clash’s to fill up all four, which is essential to land the games rare ultimate move that will kill your opponent instantly when landed. To get to that, you must have only one character remaining. You then have to active Resonance Blaze with the Assist button. This will give your character a few advantages such as more chip damage, refilling your red health, skill gauge automatically fills up, and skills can be cancelled into Distortion Skills. Also in this mode, with a full team synergy your skill gauge will go up to 9 bars. With this you can land the ultimate attack known as Astral Heat. It’s a more cinematic move and when landed, your opponent is instantly killed. 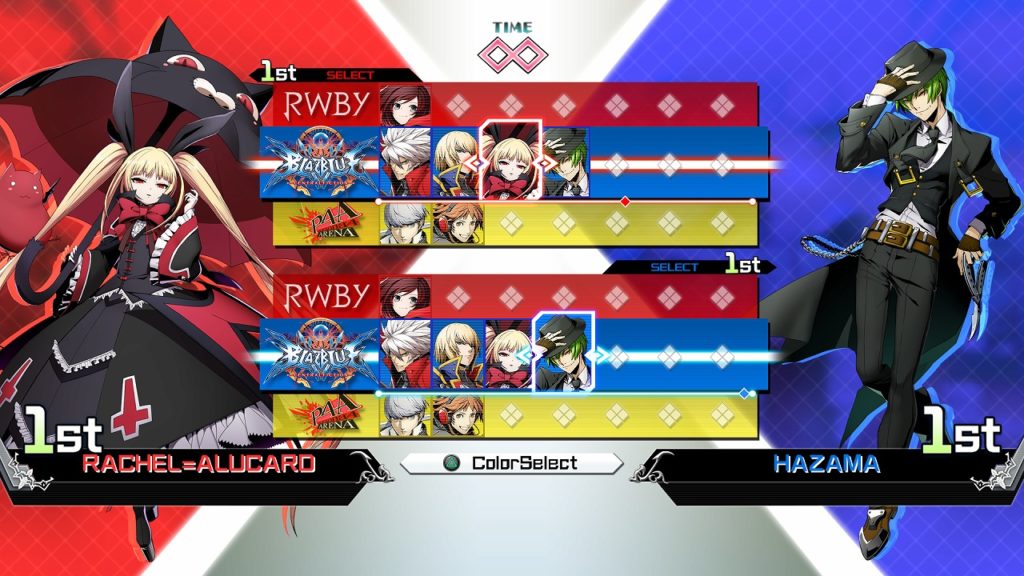 There are many other modes in the game. You have a mission mode where you can practice your skills to complete specific objectives. Survival mode to see how many battles you can win until your team is finally defeated. There’s story mode that pits the characters from all four series together in a strange tournament. This is the weakest mode as the story is just told through character portraits. No real cut scenes of any sorts which is a shame as the voice actors do a very good job and you feel how fun these characters personalities are. You also have a choice to go with the Japanese or English voices. You’ll have a lobby to run around in like in Dragonball Fighter Z where you can choose an Avatar and customize your profile after purchasing what you want from the store. Money is earned by playing through all these modes and there are no micro transactions for any of the shop items outside of additional colors if you choose to not try to use in game money to purchase them yourself. You can play online with friends or in ranked matches and it’s very easy to setup with other players as you join other players in a lobby to begin a match. With 24 characters to choose from and more on the way with the season pass that will add 18 more characters for $20 on top of its $50 price tag. This game offers a lot for fans of the genre.

Even if you’re not familiar with the characters from the respective franchise, you’ll still have a ton of enjoyment online and with friends as you battle it out in this fast-paced team battle fighting game. With enough modes to get teach you the game and better your skills and a large roster of interesting characters that are portrayed with some of the most beautiful sprite work for a 2D fighting game. You won’t want to pass up on what can be taken as one of the best fighting games out there today.