It’s absolutely criminal that a movie with the title Bloodshot is rated PG-13. Everything in this movie, from the way characters fight, to the injuries Vin Diesel sustains, to the broadcast TV-esque sex scene in the first 20 minutes, suggest a much tougher film somewhere. Joe Bob Briggs would be ashamed.

Alas, we live in an era where every film must not only launch a franchise, but a cinematic universe. And there are precious few cinematic universes that can begin with an R-rated title. Which is precisely why this film is the opposite of compelling. The product we watch here feels like something that went before test audience after test audience, trying to find the perfect balance of being inoffensive enough to avoid controversy, yet exciting enough to attract audiences. The final product feels entirely bland as a result.

There’s a clever idea with the origins of Vin Diesel’s Ray Garrison. He’s given a cliched action hero story: a man whose wife is murdered by Bad Guys (™) who leave him for dead. He’s then reconstructed by the military with artificial enhancements, which he then uses to seek revenge. Only, his past may be more multiple choice than he realizes.

It’s a potentially interesting development that was unfortunately spoiled by every single one of the film’s trailers. Thus, any possible cleverness that could be had with playing those developments is washed away before the audience even enters the theater. The film then plays every familiar action movie note completely straight. No stone is left unturned here: from the quirky hacker, the beautiful partner who may or may not be attracted to our hero, the head villain with an indecipherable accent, all the familiar action movie signposts get a nod. Bloodshot even has not one, but two scenes of characters slowly walking away from explosions behind them! 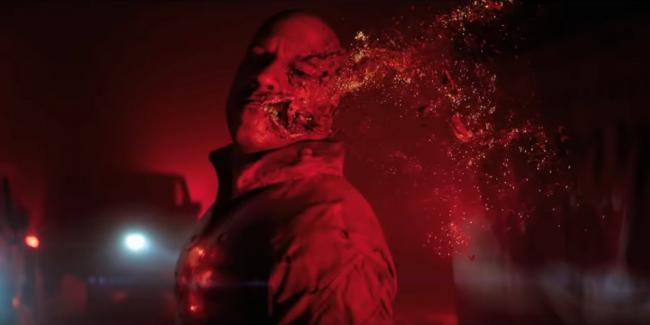 But it’s not done in the self-referential way that the first act had. Once we move past that first act revelation, the film’s flaws are even more prominent. The film begins to noticeably follow a pattern of action to exposition, action to exposition. The action sequences the exposition leads to are confusingly staged and edited. The climactic duel in particular views like a poorly-rendered cutscene from a mid-2000’s video game.

Have you seen this:
Marjorie Finnegan Temporal Criminal #4 (REVIEW)

Indeed, the film feels like a combination of the lesser parts of Metal Gear Solid and Edge of Tomorrow. Something that can imitate aspects of both works decently enough, but completely lacking the heart and soul that made either memorable. There’s nothing staggeringly terrible here, but that’s where Bloodshot’s biggest fault lies. Everything that happens here happens in the name of establishing a brand. Nothing feels like it came from a vision, misguided or otherwise.

In Edge of Tomorrow, the repetition served a thematic purpose. Here, the familiar pattern only serves to wear down our patience until the movie arrives at its abrupt conclusion. The movie ends with the promise of more sequels. If we’re lucky, perhaps the writers can pick up a fresh story or two along the way.