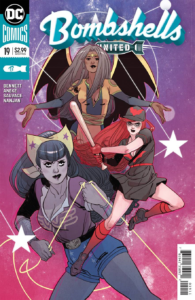 The Bombshells final issue is brought to a close this week with the grief and grace that has adorned the series. The writing by Marguerite Bennett is as empowering as ever and this issue has some of the most inspiring messages of it’s run. I’m truly sad to see this fantastic series end it has been a pleasure to have followed each of our heroines fighting for our rights and freedom. This issue is handled full of love and respect for the series and its characters and for this, I thank the entire Bombshells Team.

The final issue sees us return to the  Jokers daughters reign of terror which has now been halted by Zatanna and the Bombshells. The war is over and we see the Bombshells worldwide celebrating their victory. Seeing Kate Kane and Maggie reunited and embracing after the war ends is a heartwarming early page and sets the tone perfectly for the issue. At its core, it’s about empowerment, about friendship, and about love and I felt this through its panels. Moments such as Kate proud of her Batgirls, Supergirl and Lois sharing a moment and it’s final pages of life after the war are incredibly moving.

Have you seen this:
ECHOLANDS # 1 (REVIEW)

A lot of the issue and it’s dialogue is recapping the heroines life after the war. Where are they now? What normal life do they now lead? I found this a great way to close its run and was a genius idea to do this. This along with Marguerite Bennetts writing style and emotional yet strong messages for the future made the issue less of an upsetting ending and more of a victorious triumph. Each section of wording is more uplifting than the last and I felt proud of both what the Bombshells themselves had achieved and the Bombshells Team for closing this run in this way.

The artwork is yet again incredible and highlights the emotions each of our heroines are dealing with. The early close up of Zatanna crying will make you feel just that and if you’ve read the entire series be prepared. It’s going to make you feel both like wanting to run a marathon and wanting to have a quiet moment to yourself. But that’s why we read comics, to feel what they feel, to be on the journey they are on. This series and issue have done just that to brilliant effect.

I loved seeing each character in their new lives after the war and there’s also an epilogue involving Bruce Wayne set in 1960, twenty years after the war has ended. I’m not going to spoil this ending as it’s quite interesting to add this in at the end. There’s a reason I can see Marguerite Bennett added this and it follows the same message of empowerment the issue and series has. It’s an unbelievably powerful and emotional final issue and it’s been a joy to follow the Bombshells to a close.