Nintendo Switch gets the first crossover of the year with Bridge Constructor Portal.

Developer Clockstone STUDIO and publisher Headsup Games have been flying the Bridge Constructor flag for quite some time but unfortunately, it’s been languishing on the PC and mobile market, waiting for its big break. Well, that break is here and in the form of a crossover with one of the biggest selling games of the console generation: Portal.

In Bridge Constructor Portal, players take control of an unnamed employee of the Aperture Science Enrichment Center, the famed facility from the Portal series. As the newest employee, it’s up to you to learn the ins-and-outs of your job – navigating a forklift through 60 dangerous test chambers using only bridges and of your design. Using a unique combination of puzzle and engineering skills, players will need to create bridges that span gaps, cross pools of acid, and avoid other various perils. Within each test chamber, players get a set number of forklifts (lives) with which to test their creations. There is also a budget that limits the number of different tools and materials you can use and awards bonuses for players that can use minimal amounts to cross the gaps. 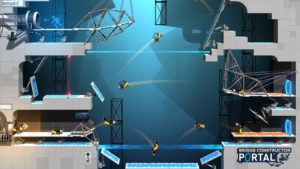 Bridge Constructor Portal is full of humor and charm. From the opening moments at the Aperture Science Enrichment Center, the audience is treated to a barrage of jokes that come straight from the humorous minds behind Portal. The puzzles themselves can be difficult, but it’s this humor that limits the frustration and keeps players coming back for more. The control scheme has been ported from the mobile versions, allowing players to use their Switch to create bridges with swipes across their screen, yet the game plays very well in docked mode. To compliment this option, Clockstone STUDIO has implemented a very nice control scheme that makes it easy to manipulate your creations with the joy-cons or pro controller. Using this mode will give players the chance to show off their creations on the big screen, something I can’t recommend enough as this is a hilarious and fun game to play and watch group. 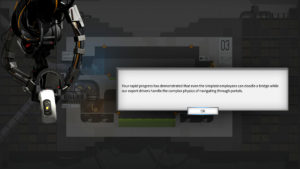 While other features from the Portal series make appearances, including the return of original GLaDOS voice actor Ellen McLain and the titular portals, however, this is where the crossover stops. Fans of Portal looking for new story details or an adventure on par with the main series will be sorely disappointed, as the merging of the two franchises is merely skin deep.  In the end, you’re often left with some of the limiting aspects of Bridge Constructor itself; the repetitive nature of the levels that leaves this as a game best played in short bursts. This is not necessarily a bad thing, especially as the Switch is a portable console, however it does not do much to justify a $14.99 price point for a game that is $4.99 on any mobile device.

For fans of the Bridge Constructor series, this will be a great opportunity to bridge the gap (oh yeah, I did it) between the mobile and console versions. For Portal fans, this may feel more like a lesson in structural engineering and patience than the classic Portal game. A fan of both? Then this is the game for you. 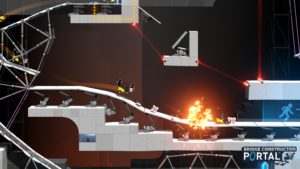 Bridge Constructor Portal is available now for the Nintendo Switch, XBOX ONE, PS4, Android, iOS, Windows, Linux, and Mac (so basically everything) at the price of $14.99 USD.

Bridge Constructor Portal hits the mark as a fun puzzle game with enough humor to keep players happy yet the price point may keep some gamers away.