Bringing Back The Pulp with ‘The Baboon’ Creator Jamie Jones 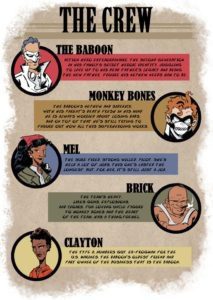 There’s something wonderful about the Golden Age of Pulp Comics. A dashing hero, his naive sidekick and campy teammates are the essential cast in The Baboon, a love letter to the classics. The Baboon brings up nostalgic feelings of the 40s and 50s characters and villainous plots, matched with a striking color palette.

In an era where the big name books are too serious and trying to deal with metaphors for today’s society, The Baboon takes a step back in time to get back to being just a Comic with a capital ‘C’.

The second half of being a great comic comes from the art. I’ve been following Jones’ work since I happened across The Dodger and his other credited works. From his character models to the linework and ink washing, it’s an appealing art style. In this Kickstarter project, he is the writer, artist, inker, colorist, letterer, and designer…a heavy workload for sure.

Geeks World Wide: How long has this project been in the works (from being an idea to this completed Kickstarter)?

Jamie Jones: I think I did the first sketches two years ago. Just character designs. I do a lot of those 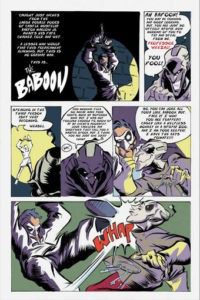 for fun. Just ideas for characters. But the Baboon stuck around. I would find myself doodling his mask while I was on the phone. But the book proper was started a little over a year ago. Right before I started working on Kicking Ice. Then I had to put it aside and only work on it in between projects.

GWW: What inspired you to write this story?

JJ: I wanted to do something that I would have liked as a kid. But not a “kids” book. I LOVE action-adventure comics and really wanted to do one. I think there is a gap in the comics market for comics that are truly for all ages. Characters that can appeal to adults but there is nothing inappropriate for children. Everyone loves Johnny Quest, and that is a cartoon for children, but adults love it. The characters and stories are timeless. 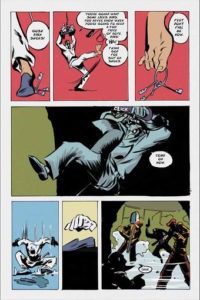 GWW: What’s it like being the writer, artist, inker, colorist, letterer, and designer?

JJ: Oof. It’s a lot. But, for something like this I wouldn’t want it any other way. This comic has brought me back to making comics in my bedroom when I was 8. I have complete control of the vision. The book is going to be a 60-page hardcover. I couldn’t get a publisher to do that. I’m making the comic I want to make.

GWW: Is it a heavy workload?

JJ: It’s a lot of work. But, the work is fun. Making up characters and writing stories is a lot of daydreaming. Then you have to actually put pen to paper. The work load was never heavy, just time-consuming. I would give up nights out to make the 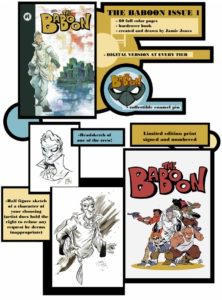 comic. The hardest part was drawing comics all day for the day job and then turning around to make The Baboon in my free time.

GWW: Do you have plans for an expanded universe with more heroes, villains and books?

Jamie Jones: Oh do I have plans! Villains everywhere! One of my earliest ideas for the Baboon was a comic strip where he fought a huge cast of baddies, each weirder than the last. Dick Tracy style. So I’ve got some villains lined up. I have loosely plotted scripts for the 2nd and 3rd Baboon books. So, I definitely have more stories I want to tell. And I just added my first stretch goal to The Baboon Kickstarter. It’s a Baboon short story. An 8-10 page stand-alone story featuring a new character Lorenzo Cult!

When it’s a work of passion, it’s not really work. If you love classic golden age stories, action-adventure cartoons of Hanna-Barbara era,

then check out The Baboon on Kickstarter.  At this point, the book is 82% funded with 20 days left!

The Art of Jamie Jones(FaceBook)