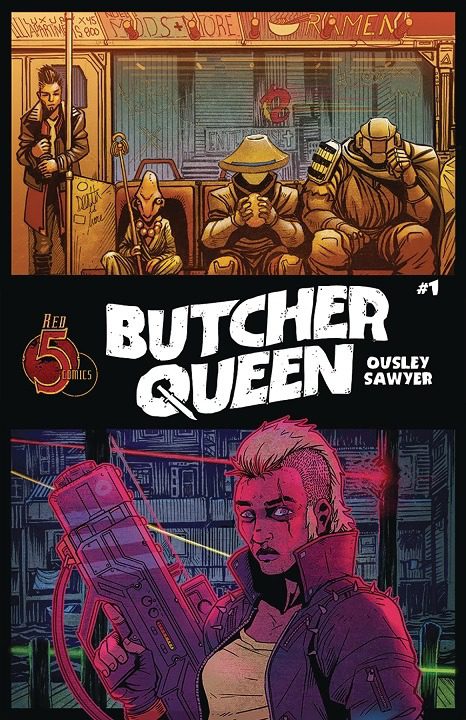 A new comic hits the shelves today from the same team that brought you “The Rough & Tumble” and “The Dead Palace”. Jim Ousley (writer) and Ben Sawyer (artist) bring you “Butcher Queen”, a sci-fi dystopian world of humans and aliens that feels like equal parts “Fray” and “Blade Runner” in just the perfect measures. In this story, we find former cop Syd Kiowa finding her way as a gun-for-hire after the brutal murder of her partner several years prior. After an horrific attack on a train full of alien off-worlders, Syd answers a distress call from someone who may have information about just who perpetrated the attack as well as how to potentially stop these mysterious Overseers who are determined to eradicate the off-worlders completely.

Published by Red 5 Comics, “Butcher Queen” expertly weaves Ousley’s smooth-flowing words with Sawyer’s versatile pencils into a rich tale of action-edged science fiction that feels somehow both alien and yet familiar given current events. Having collaborated on projects in the past, it’s no wonder that Ousley & Sawyer are able to bring a new comic to life that seems effortless both in it’s presentation and in reader immersion. Many times comics take-off quickly and with independent titles performing better and better in recent months, “Butcher Queen” is a title that you won’t want to let slip past your radar! There are several variant covers from which to choose so make sure to pick this one up on today’s NCBD and be sure to ask your local comic book store to order the future issues as well. I, for one, can’t wait to see where this thrill ride takes us!