So, NINE different artists got to show off their work in the Cable & Deadpool Annual #1. Normally I’m not a fan of something like this. I’d rather stick with one artist for a whole series, never mind just the one issue. There was some artwork I enjoyed over others, but I will say having multiple artists was actually a very good decision in this case.

It’s a big, 30-page issue, you’ve got Cable and Deadpool bouncing around a messed up timeline, so having varying works of art actually makes a lot of sense.

And the reason the timeline is messed up is all because of this guy, Dr. Justin Alphonse Gamble, doesn’t know how to take NO for an answer. David F. Walker used this pathetic loser to talk about a major, real-life social issue, and did so very effectively. With everything that’s gone on in society, you instantly feel pain for Ali Ciad, the woman Gamble is stalking through time.

Walker also took this opportunity to use Deadpool as a vehicle to promote comics over movies. Everything was spot on in Deadpool’s argument. Couldn’t agree with his argument more.

The one thing that was weird for me in all this was it was the first time I’ve ever been legitimately annoyed with Deadpool. The whole thing with his “mom” and whether or not she’s really his mom was just so…well, I guess pretty typical for Deadpool, I for some reason have never reacted like that behind.

Last thing: when you go to the very last page of the story, take a second to soak in the very last panel. I believe Paco Diaz drew that one. It is SCARY how much Cable looks like Josh Brolin in that picture. 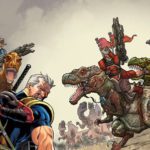