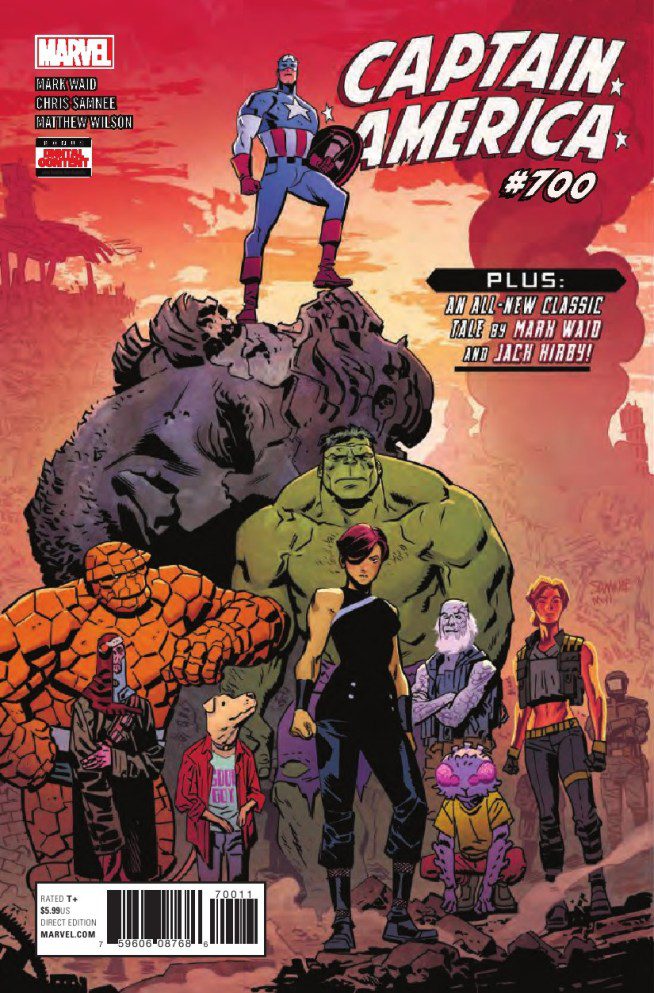 Wise words and astounding action blend effortlessly in Waid and Samnee’s Captain America #700, turning out a genuinely endearing conclusion to their Out of Time arc. Readers looking for peak-Cap characterization and story will find it within these pages. Each turn of the page reveals my Cap, our Cap, in word and indeed. Authentically. I cannot imagine a more poignant and consummate way to honor Captain America’s 700th issue.

As the story starts, our heroes have won their biggest, but not their last, battle. Rampart and King Babbington have been toppled but the work of rebuilding has just begun. Repelling foreign attacks and decimated infrastructure keep Cap and the band of now-victorious rebels busy in the first half of the issue. All of these everyday heroes led unflinchingly by Captain America, spend nearly a year cobbling together the remnants attempting to make a new whole. The challenges of rebuilding a democracy, especially after a despotic 1% has blown 90% of the population away, push Cap and his crew to the breaking point.

The heart of this story, the idea that we have to put in the work to save what we love, beats on every page and panel. In the face of a murderous despotic rule, these characters had to do more than just hope to survive. They had to rise above their station, their everyday jobs, and make a stand. What no one remembers is, that in the middle of a war, the end is unknown. Saving the world, your nation, your identity as a people from utter destruction is a marathon with a constantly moving finish line. Each plot point of Captain America #700 proves this without a doubt. Samnee and Waid’s run on Captain America starkly reminds us that we need to be our own heroes, and if we’re fortunate enough to find a real-life person with half the integrity Steve Rogers has, we count ourselves lucky.

The rest of the characters (including every reader) will never possess Captain America’s skill and ability but the story reminds us that within each of us is the capacity to act, fueled and inspired by hope.

As often as Cap is seen as an individualistic hero, everyone knows his real power is inspiring others. Cap’s been known to sacrifice himself for the greater good, so his true legacy is what the people left behind do in his absence. Between battles and fights, Captain America #700 reminds us building a democracy, or rebuilding it, cannot be done by one person. One person cannot be responsible for fixing everything, no matter how nice it would be if we didn’t have to take responsibility.

Cap’s leadership role in this issue is understandable but untenable. Feeling burned by the disastrous results of Rampart and Babbington’s machinations, the common people turned to Cap and do what any of us would do, put their trust and their faith in the one incorruptible person left standing, Steve Rogers. The cost on Cap to lead in this way, functioning as a de facto king, cannot be taken lightly. Cap’s path of choices throughout the issue shows us this.

Before I get too philosophical (and eventually patriotically weepy) I have to get loud and proud about the art in this issue. Matt Wilson’s vibrant colors jump and pop on the page, propelling the action forward precisely and with great care.  Where classic Cap comics use vivid colors, Wilson’s feel nuanced and lend weight and drama to Samnee’s characteristically abstract-y style. Looking back at earlier issues, Wilson leverages the colors in a way to remind the reader that the blood red despotic rule is over but the chaos is not. Nearly every color of the rainbow gets used, either boldly or mutedly, all effectively, in this issue.

Look at this face. This is the face of a man who has fought, for nearly a year, to save his country and stitch it back together. This is the face of a man in the first stages of recognizing utter defeat. The panel below comes after many action-packed pages. The strong centering on Cap in this panel lets all the busyness and action fall away. Our eye is drawn immediately to Cap’s shocked/distraught reaction. We are hanging in the moment with him. It takes real energy to pull away from Cap’s eyes to notice the background characters’ facial reactions. They are just as detailed as Cap but their muted colors reinforce the Cap’s despair.

One of my absolute favorite pages in the entire issue falls just over halfway through the story. Cap’s made a decision, as he’s wont to do, with no guarantee of a successful outcome. The use of silhouette makes this moment powerful. By removing all other distractions, Samnee and Wilson let the reader (and the characters) take a breath, think, and appreciate the scene for what it is and what it means. Cap and Liang have been fighting and rebuilding, side by side, for nearly a year. The vast majority of their panels and pages together are full of action and movement. By forcing the movement to stop, the characters (and the reader) get a real chance to glimpse Cap’s human side.

Beyond the use of silhouette, Samnee and Wilson add emotional weight by what’s not in the panel. The complete lack of visual background noise gives the panel the focus and space my romantic heart loves. There are no bombs going off, no other characters intruding in their moment. These five small panels remind me of the famous Rick and Isla scene at the end of Casablanca. Of course, as Liang says goodbye we can tell by how she’s drawn that she is the one triggering the event that sends the story off in a new direction, separating them forever. My heart!

There’s always that small moment, in the midst of chaos, where everything quiets and you get grace and clarity. Samnee and Wilson give the readers this gift and do it simply and beautifully.

I won’t spoil the twist and turns that lead to an enthralling ending. Waid, Samnee, and Wilson have rendered a Cap that is both heartening and restorative. The world we live in today needs clear reminders of who we are and what we value. Captain America, at his best and most authentically told, meets the reader in whatever chaos surrounds them and reminds them that they have the tools to bring justice, fairness, and dignity where it is needed. Sometimes those needs are global. Sometimes those needs are inside each of us.

Bonus! There’s a totally charming mini-story at the end by Mark Waid based on material by Stan Lee and Jack Kirby. Again, Matt Wilson knocks the colors out of the park on original Jack Kirby artwork. Cap goes up against all his best villains. It’s a charmer!