The latest entry in the Marvel Cinematic Universe blasts into theaters this weekend! ‘Captain Marvel‘ hits the ground running as we are treated to the MCU’s first female-led movie to date starring Brie Larson in the titular role. Beginning the film as a Kree soldier, Vers (Larson) fights alongside her elite team working to stop the spread of the shape-shifting Skrull alien race. But when a mission goes wrong and she ends up being captured by the enemy, she begins to learn that her memories may have been tampered with and she soon begins to question everything that she’s come to know.

Anyone familiar with the comics will recognize the convoluted and complicated history that Carol Danvers (AKA: Ms. Marvel, AKA: Binary, AKA: Warbird, AKA: Captain Marvel) has had since she first debuted in Marvel Super-Heroes #13 back in 1968. So while her origin story isn’t as clear cut as, say, Captain America’s or Iron Man’s, the writing and directing team of Anna Boden & Ryan Fleck do a truly superb job of giving us a succinct and solid genesis for this dynamic character. The story is set in the mid-1990s which provides a lot of fun moments complete with Blockbuster Video stores, NIN shirts and AltaVista search engines. We also get to see a young Agent Nick Fury and rookie Agent Phil Coulson (although much more of the former than we see of the latter). The film has all of the action, fun and heart that we’ve grown accustomed to see in the Marvel movies and, being set in the 90’s, also boasts the best soundtrack since the original ‘Guardians Of The Galaxy‘.

The entire cast is exceptional and it’s always great to get more of Samuel L. Jackson‘s Nick Fury. I was also very pleased with the inclusion of young Monica Rambeau (who is the Captain Marvel that I remember when I started reading Marvel Comics) but her mother Maria Rambeau has a larger role as Carol Danvers’ former USAF partner (played by Lashana Lynch). Jude Law plays Carol’s / Vers’ commander Yon-Rogg and Gemma Chan plays Kree soldier/sniper Minn-Erva. Other noteworthy names such as Annette Bening, Djimon Hounsou, Ben Mendelsohn and Lee Pace round out this awesome ensemble who come together to deliver one of the Marvel Cinematic Universe’s strongest entries to date. It provides a serviceable origin to a character who has a rather complex back story and it perfectly sets the stage for the upcoming ‘Avengers: Endgame’ due out in May. Tickets are on sale now AND make sure you stick around for both of the post-credit scenes!! On a scale of 1 to 10, I’d say that ‘Captain Marvel’ rates an out of this world 8.5! Take it from Kree… I mean… take it from me, this will be one movie that you’ll need to get out and see in theaters right away! 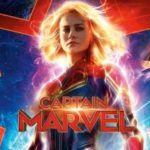 ‘The Suicide Squad’ Will Include King Shark, ...