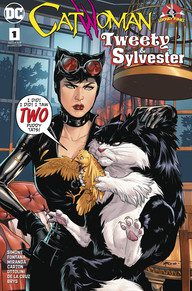 Recently, DC Comics has been releasing one-shot issues that feature major DC characters teaming up with a classic Warner Brothers’ Looney Toons.  This issue sees Catwoman and Black Canary with their respective bird and cat.

Gail Simone’s writing is charming and hilarious. She pulls references from previous runs she has done and heavily mentions the Birds of Prey and the Secret Six. This book while Looney Toons based is a female-driven story. Catwoman and Black Canary forced to stop a bet set up by a coven of witches at the direction of Sylvester and Tweety. The two heroes are at opposing ends and bring a host of other characters into play.

Almost every cat and bird-related character at one point or another join the fight. The fight between Dinah and Selina respectively is thrilling. The two are fantastic martial artists and are fairly evenly matched.

Simone’s clever and witty style excels here. In addition, Inaki Miranda’s art is beautiful. The fight scenes are well done and use the panels are mere guidelines. Often pages are divided into two between Catwoman and then Black Canary’s point of view.

In addition, Eva De La Cruz’s coloring is very vibrant. Between Cruz’s colors and Miranda’s art, it was hard to tell at first Sylvester and Tweety was the classic characters, which was the point. Both characters were written with their odd lisps/accents which make reading slightly challenging but also kept to the overall theme of the book and the original Looney Toons’ characters. Taylor Esposito’s lettering worked well with Simone’s writing. Despite the book being wordy, it did not feel crowded.

The Catwoman/Tweety and Sylvester Special is a fun one-shot and breaks up the usually darker tone comics sometimes take. If you enjoy Looney Toons I recommend this book but also if you have an affinity for Simone’s writing, particularly on Birds of Prey, I highly recommend this book.