Caveblazers is a action roguelike platformer by Rupeck Games and published by The Yogscast. Each game is unique due to its procedurally generated levels, and randomized items in chests, crates, and bags.

You are an unnamed adventurer, entering the cave like so many people before you have with the ultimate prize in mind. The only problem with that is firstly you’re not sure what that is, and secondly you’ve got hundreds of hungry monsters and creatures in your way.

In the beginning of the game you are treated to a very quick tutorial by an angry old man who waits in the cave who seems to serve no purpose than to heckle those going into the cave. You then enter the first cave.

You will wander around the cave jumping from platform to platform and doing battle with creatures. When you have a moment free of danger (good luck with that) you’ll be breaking open various containers to hopefully either find treasure, weapons, or maybe a magic item. The weapons vary from melee, to ranged. Most of the weapons have different effects. For example,  you may find a sword that deals a ton of damage, but the downside is that it has a slow speed, which means that your character won’t be slicing and dicing, he’ll just be slicing ever so gently. To counter this you may find a magic item such as a ring that increases your attack speed. So then your sword becomes even more powerful due to being able to hit enemies at a greater speed.

Along with combat, there is some puzzle solving too. This layer of gameplay shows up as early as the first cave where there are some spots in the walls that are kind of tricky to see at first, but shoot all of them and a secret door will open taking you to an arena where, if you can manage to stay alive, you’ll earn a relic, which provides a boost. But even this comes with a downside, as well. Thus far I’ve collected two relics. Here’s a picture of one of the spots I was talking about. 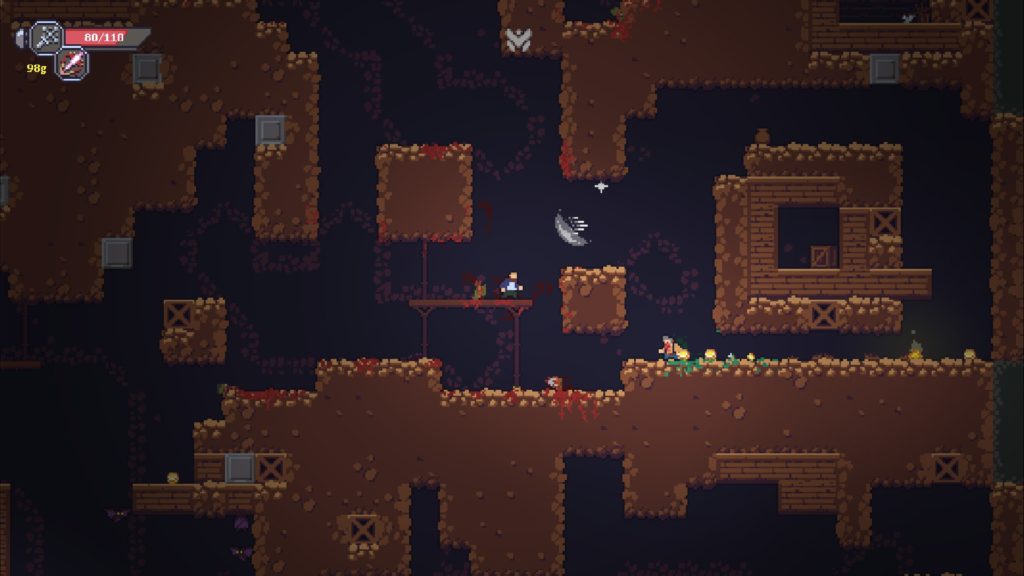 Straight above the a character you will see a glowing chevron. That is the spot that needed to be shot. Find all 4 and you’ll be face-to-face with an arena door that may mean your death. As with rogue like games, unfortunately if you die, you go back to the main cave, where you will be starting from scratch. Along the way you can unlock perks that start you off with different items and abilities. For instance you start the game with the Adventurer perk which starts you with a sword, bow, 2 bombs, and a juicy apple to start you on your way. Another perk is the Archer’s perk which starts you with stronger and quicker arrows, but no sword, no bombs, and no food. It’s up to you to pick which perk you want, and there’s a strategy for all of them.

After a certain amount of levels you will reach a boss level, which could be any number of random bosses ranging from a giant computerized cube to a giant spider (ugh). Defeat them and you’ll be moving onto the next part of the dungeon.

Have you seen this:
Torchlight III is Here

Along the way you may also run into other random treasure hunters. They may help defeat some of the enemies along the way, or they might be a complete pain in the ass and grab up any treasure they find. Once again, this is all random.

Overall this game is a lot of fun, but you WILL be seeing this screen a lot. 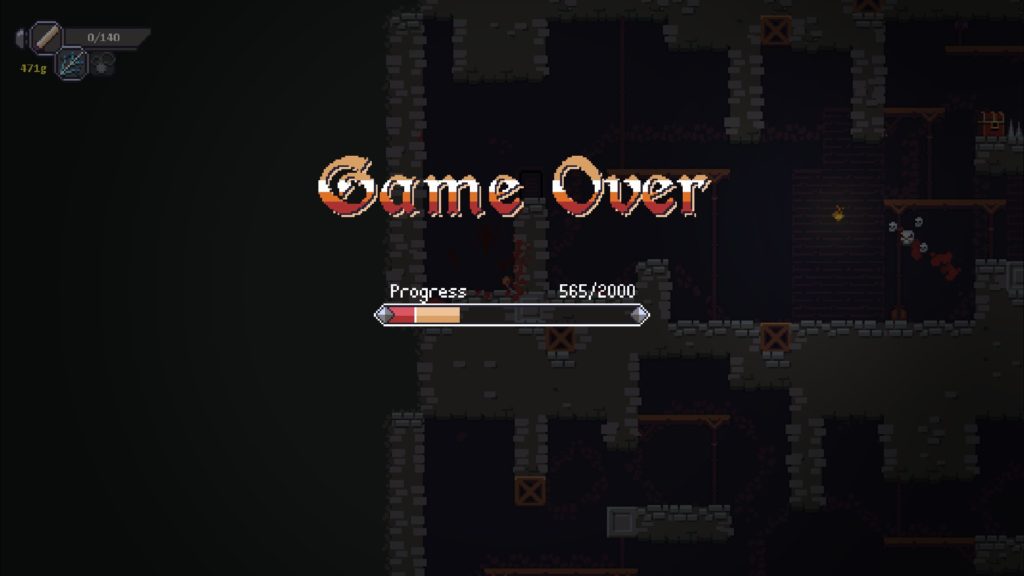 As you can see there is a progression bar, and every time you die you earn some experience, reaching the end of the bar will give you an unlocked item or perk. Obviously in the beginning it’s easier to fill up the bar, and you’ll mostly earn clothing for your character.

This is a really addicting game, and I’ve already put a lot of hours into it. The only thing that maybe it’s lacking is multiplayer. This would be a TON of fun with a friend, but as of now, it’s still a great deal of fun as a single player experience.

Graphics: The graphics are your run of the mill pixel graphics which if you like that type of art style, you’ll love it

Soundtrack: The in game soundtrack is beautiful, and I have thoroughly enjoyed it

Sounds: The sound effects are good, and it’s extremely satisfiying to hear the plunk of your arrows being shot.