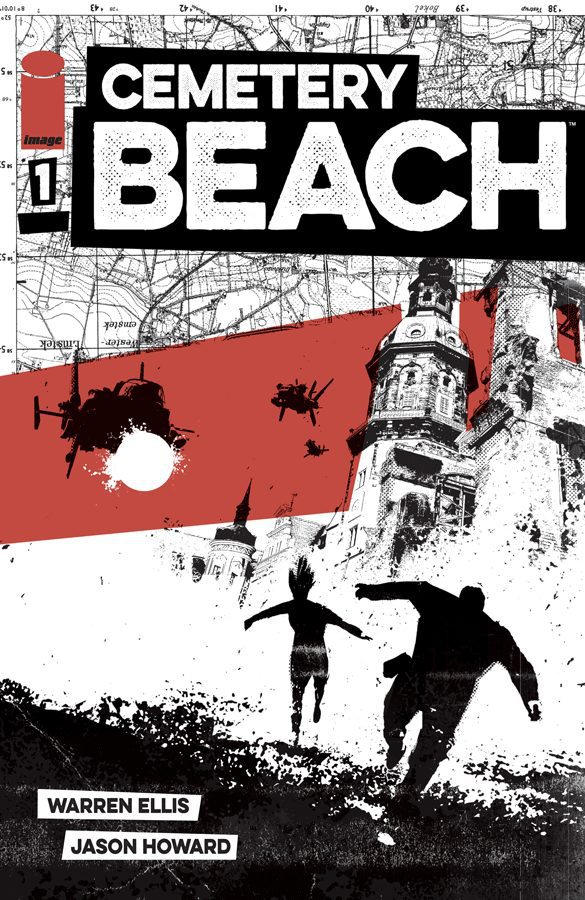 In this debut issue of Cemetery Beach, writer Warren Ellis throws a lot at you very quickly. Mike Blackburn is on a reconnaissance mission for the US Government, scouting out a colony built on another planet in the 1920’s that was just recently rediscovered.  After arriving, he is detained and interrogated by a prison guard. Tricking the guard into coming too close to him, Blackburn escapes his cell and encounters a woman named Grace Moody, who is in prison for ‘murderous shit.’ With her help, Blackburn escapes the facility and into the vast city that the colony has become. Moody and Blackburn are pursued by many guards as they escape, and Blackburn uses weapons of which he’s never seen before to fight them all off. The leader of the colony, President Barrow, is alerted of his escape and realizes that the ‘Oldhome’ is finally coming for them, to which he says he ‘will not allow it,’ ending the issue on quite a cliffhanger.

Ellis’s writing was fantastic in this first issue. He let the dialogue explain the whole story in a natural way that perfectly set up the rest of the series. He also introduced a few very interesting characters. Michael Blackburn is a charismatic fellow, who doesn’t seem to tell people who he really is. There is definitely more to his story and mission than what he let on to the guard at the prison. We don’t learn a lot about Grace Moody in this issue, but then again, this was more setup than anything. Barrow seems to be the villain of this whole story, who gives off the impression of being more of a dictator than President. Ellis’s writing definitely seemed to take a backseat in this action-heavy issue, with Jason Howard’s art taking the forefront.

Howard’s illustrations were amazing, cartoony, and totally gave off the impression of an old sci-fi serial, which is exactly what I was looking for in this book. His multi-page spreads taking up the middle part of the issue fit in perfectly and were absolutely gorgeous, with colorings that matched perfectly. Facial expression was surprisingly well done. Usually, when you see something this action-oriented the artist loses focus on making sure the character’s reactions and expressions match the movement and behavior, but Howard has no trouble displaying the character’s emotions properly.

Cemetery Beach #1 was a strong first issue with good writing and explanative detail that set up the rest of the series really well. Howard’s art was stellar and I can’t wait to see more of it.