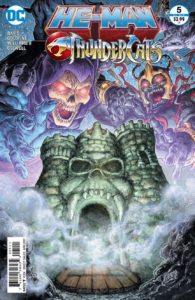 At some point in any action figured filled childhood there came a point where worlds blended together and all the characters fought each other. The limited series by Rob David and Lloyd Goldfine had avoided this low hanging narrative fruit through the first four issues. David and Goldfine peppered each issue with visceral action and mythology that expanded the worlds of both franchises. Issue #5 appears to take place during the events of the last issue and thus the battle is a holding pattern until the central heroes can arrive.

Those childhood battles that provided a fun way for various characters to interact created team ups of personalities and abilities. Fans of each of these franchises could have been waiting for this issue to see those mashup moments. Man-at-Arms building with Panthro. Cheetra and Teela teaming up to fight evil. Even the child personifications in Orko and the twins WilyKit and WilyKat get a chance to see action. In true 1980’s cartoon fashion, Snarf gets to be a bumbling hero as well. The battle is fun and well choreographed and works well to show what happened with the rest of the cast during the last issue. Unfortunately, while it’s a sweet treat to see favorite characters in the spotlight, like candy it’s ultimately unsatisfying. 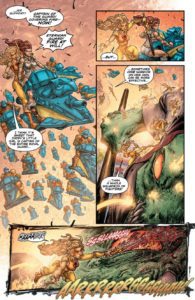 Freddie E. Williams II artwork remains satisfying though. His colorful depictions of the characters and the battle is the highlight of this issue. How Williams depicts the interactions with the spectral Jaga and the Sorceress is both mystical and powerful as they provide the key to turning the battle. Both of these characters were limited in this crossover and this issue provides them both a chance to shine. Williams II art and Jeremy Colwell’s colors are a constant source of enjoyment for fans of either franchise. Colwell’s dreamy colors are fitting for the childhood recollections that many readers will have reading this series.

The issue is action packed but ultimately does little to move the story forward. Issue #6 should be an exciting conclusion to this fandom crossover, but issue #5 is a fun bit a fan service that provides time for each of the supporting cast, but ultimately is a way to pass the time until star characters arrive. The final issue sets up a climatic battle between the united villains of Skeletor and Mumm-Ra and the central heroes of Lion-o and He-Man.