WARNING: CONTAINS SPOILERS FOR SUPERMAN #18…IF YOU WANT TO READ THE ISSUE BEFORE READING THE ARTICLE

Superman has revealed to the world that he is Clark Kent in a stunning issue written by Brian Michael Bendis, drawn by Ivan Reis and published by DC Comics. (Naturally)

In what will be a historic moment for one of comic’s most well-known superheroes, the world watched as Superman announced in front of a press conference that he is no longer willing to hide behind his secret identity, Daily Planet reporter Clark Kent; this shatters what has long been a standard of the character since his early days in Action Comics. 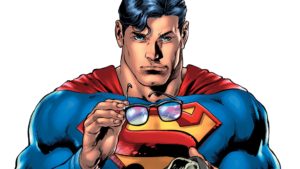 If you want a more in-depth look at the issue you can read a review by our own talented Percy Waelchl by clicking HERE. One of the lines from Percy’s review that I wholeheartedly agree with is “After Superman’s death in the 1990s, the most compelling storytelling came when writers explored how characters reacted and responded to the loss of Superman. There are fertile storytelling opportunities for compelling stories as friends and enemies respond to the news.” This is a moment built to shift the dynamics of the character, the supporting cast, and the title as it moves into 2020.

The idea of Superman “coming out” as Clark Kent touches on the courage, conviction, and honesty that Superman has always embodied and touches on a relevant social issue of acceptance as readers can point to many, many real-world moments of public figures announcing their own sexuality and personal information. Hell, this hits home on a personal level for anyone that has had a friend, family member, or loved one reveal private and deeply emotional information.

It also struck me that the change in public opinion over the decades has drastically changed and led to this moment. When Superman first began back in the 30s, it was almost noble that a hero would hide their identity as a way to avoid accolades or bask in their own celebrity. The public trusted a public figure who withheld their personal lives from public view. No questions were asked and no explanation was given. Society accepted that figures like Superman would not want the spotlight if they were virtuous in their character. The appetite for celebrity is not like it is today. Personal space and boundaries were to be respected by the press and the public. The same went for movie stars and politicians of the day. It was a different world.

Fast forward to modern-day where every aspect of a public figure’s life is on display for the masses. Between paparazzi and the endless 24/7 news cycle, privacy is a thing of the past. This need to know is also fueled by social media, where everyone shares damn near everything all the time. The public has become distrusting of an individual who is unwilling to share the details of their life. In our modern age, a secret identity is frowned upon because it is a secret. Secrets now are not looked at as a positive thing. Anonymity equals fear in the modern age. The unknown is unacceptable. “The people have a right to know”. So it was only a matter of time before the idea and concept of secret identities went the way of the dodo.

This also removes one of the most laughable elements of the Man of Steel. The joke of simply putting on a pair of glasses to fool everyone around you has been blasted in the media for years for just being a ridiculous premise that would never work. I’ll point to the SNL skit featuring the Rock to prove my point as just one instance of many. Bendis has taken that joke and turned it into a wonderful moment for the character as he reveals the truth to long-time friends like Perry White and Jimmy Olsen.

This issue will stand as a springboard into a whole new mess for Supes as the issue closes on a very pissed off Lex Luthor; who is surrounded by fellow villains from the Legion of Doom when the news breaks worldwide. It’s the closing shot on Lex that lets readers know that the status quo of Big Blue is about to change forever. Lex has never been one to be mocked or laughed at and this open ridicule from his fellow evil-doers will not stand. Clark may have dropped the glasses and the secret identity, but he may have picked up more trouble than ever before.

This comic will stand as a watershed moment for years to come and now that the secrets out the real story is just about to begin.