The Cloverfield franchise loves to keep people off-balanced and guessing, both in its films and in real life. J.J. Abrams’ brainchild films series has toyed with audiences in the past with viral marketing and quick releases, but thanks to a deal with Paramount, Netflix was able to go full Beyonce and drop a movie the same day that they released a Super Bowl trailer. The Cloverfield Paradox may not be a perfect film, but it is a damn entertaining one and a true sequel to the original 2008 found footage film.

This movie stays true to the franchise’s unique brand of sci-fi horror. There’s a healthy amount of Alien, Poltergeist, and The Twilight Zone, that show up in the film and gives it a different type of vibe from other space travel fare. Though some people may be disappointed with the overall plot, its main objective of putting humans in a situation where they must survive circumstances that are much grander than what they’re equipped to deal with shines through. With that said, the film is never as deep as it wishes it could be. But the stellar cast is able to elevate the movie past most the story’s insufficiencies.

Actress Gugu Mbatha-Raw gave a solid lead performance as Ava Hamilton. Her best parts are featured early on in the film, and she bursts with emotion but clearly deserved a more nuanced character. Every choice Ava had to make in the film was laid out in front of her, so her motivation was never in question. Daniel Brühl who plays Schmidt and David Oyelowo who plays Kiel are other standouts in the film. They really gave Daniel Brühl a lot to play with, Schmidt was perhaps just as integral to the story as Ava. Roger Davies and the brilliant Elizabeth Debicki do fantastic work with very little to work with. Every of the other cast members do an admirable job, though Chris O’Dowd as Mundy came off almost too casual at times. He always seems to give us one joke too many, but that’s not the actor’s fault.

The first two acts of the film gave such an exciting and tension-filled rush. Scenes were tense and allowed to breathe at first, but that didn’t last throughout. Director Julius Onah does a decent amount right but can’t quite stick the landing. It slows down and never pushes forward on storylines introduced earlier on in the film. But I can’t deny when things got creepy and weird it was amazing. I was also happy and surprised by how many answers we are given, which is not the norm from a J.J. movie. Don’t get me wrong, unlike with Lost, I actually like the way the Cloverfield films execute the mystery box plot device. It was refreshing to not be left with too many questions, but it still delivered on giving us plenty of mysteries to mull over till the next film. 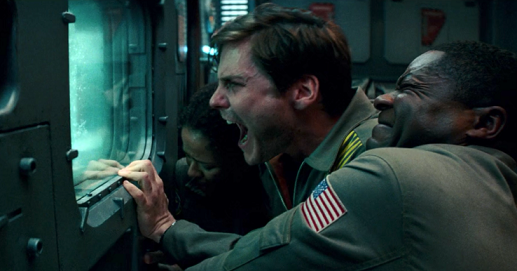 This film was exactly what it needed to be, unfortunately, it doesn’t go far enough. Yes, it gets messy at times with characters, as well as concepts, are never fully realized. Without giving too much away, I’m reminded of a certain Twilight Zone episode that puts a group of space travelers through a different yet conceptually similar situation. For fans of the show, just knowing an epic event occurred was good enough for viewers. However, time has certainly changed and the audience needs something more tangible, so we were given a more concrete ending than what we probably should have got. There was just so much potential and a lot to like about this film, that it highlights the negative more than normal. I thoroughly enjoyed The Cloverfield Paradox, it was freaky as hell and a worthy successor to the first movie. But I can’t help shaking the feeling of missed opportunities with this cast and story. It’s a very entertaining film that is good but should have been great.