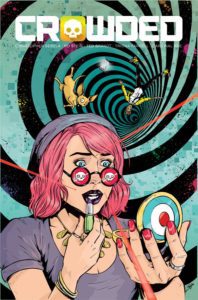 Charlie and Vita are the odd couple of the modern era. This issue really shows the depth of their differences, especially their constant clashing of ideas on everything. They, of course, get into a lot of mayhem because Charlie is dead set to find out why they put a hit on her.

The issue is pretty standard in regards to the story. We get a balance of action and ignorance as Vita and Charlie argue about every aspect of life. There is a small glimpse into each character and what makes them who and what they are. The major reveal in the story is how the Reaper app became part of everyone’s life.

The art is interesting in this issue, as Stein nails the way each character looks. His depth of facile expression is evident when Vita is dealing with her past. Sometimes the art does get simplistic when a character is at the focal point and everyone forgets about what happens.

Sebela crafts a story that can be really interesting or boring to explore. We see the way he uses side characters to explain how the Reaper app became legit and a little bit of Vitas past.

Crowded #2 is strong with little flaws. You wouldn’t think Charlie is really that stupid, but you get glimpses into it, especially with the repercussion of putting her SIM card in Vitas phone. The story does give us more background with a good use of violence.