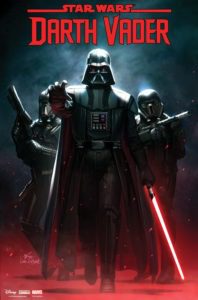 I will readily admit right here and now… I’ve barely watched the Star Wars films. I know, I know, throw the rotten tomatoes and broken lightsaber toys my way. Every time I attempt to watch them, someone comes in and changes the channel. I don’t know why. But I fear I may never watch a film in its completion.

With that said, from what I’ve watched (before being rudely interrupted each and every time) I enjoy the story, and I can see what all the hub-bub is all about, which is why I was intrigued to see a new comic series pop-up that is solely about Darth Vader. I realize he’s a very popular character with quite a history, but just about him? I thought we saw enough in the prequels! Apparently there’s more to this… man?… than previously shown.

So this story takes place right after that incredibly famous scene of “I am your father” and Luke falls into the abyss… for some reason. Kind of a dramatic exit from the awkward situation I guess. Exit in style, kid. But Luke denies the truth and leaves Vader standing there, not knowing what to do next. What ensues, is what he ends up doing next.

We get a new droid, sort of comic relief, but also the sane one in this situation as he accompanies Darth Vader on his mission to track down everyone who has ever been associated with Luke Skywalker - presumably to kill… because it’s Vader.

The ending though… dang! I don’t know how it’s possible, but… I can’t wait to see how!

With the story being fantastic, you know I have to at least mention the art. It’s who I am. The artists captured the likeness of everyone. It’s amazing. I was in awe at how the characters resembled their actor counterparts. The style is gritty and dark, matched with the gritty coloring style. I think a less than crisp appearance works well. After all, this is about a rather insane individual seeking revenge after his plan fell through. I’m sure his mind looks a bit like television static at times when he’s not thinking logically.

The use of flashbacks to Vader’s past, and inputs of his own thoughts, make him seem like there is still a human left in there somewhere. I applaud the writers and artists of this comic. It sucks you in and leaves you wanting more.