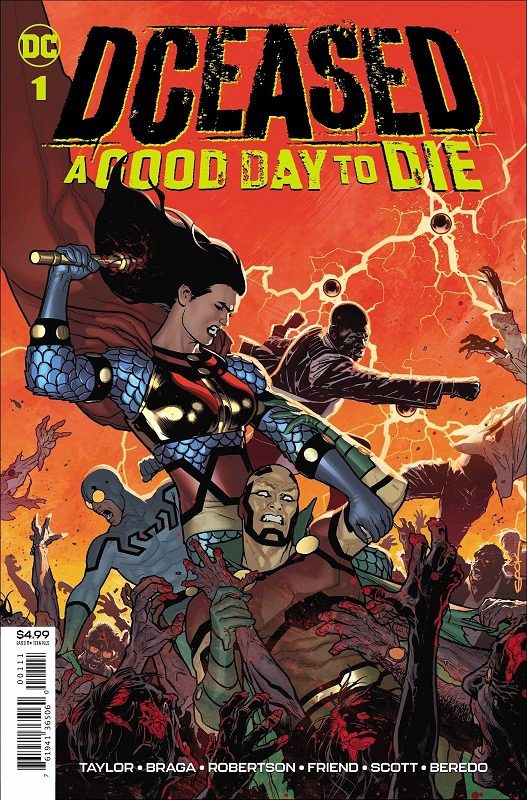 As the DC universe falls to the anti-life equation it’s a race for struggling survivors to find a way to stop or escape the chaos. This is the end and no one is getting out alive. From page one we see just how bad things are as Mister Miracle and Big Barda stand in the emptiness of space and stare out at where their home world of Apokolips used to be. The planet has exploded and left nothing behind. Darkseid and his minions are dead.

This comic is a spin off of DCeased, the DC zombie mini-series that has torn up the summer reading list of fans and critics alike. Here in a Good Day to Die we see what happens to supporting characters like Mr. Terrific, Blue Beetle, Booster Gold, John Constantine, Big Barda, Mr. Miracle, Fire, Ice, Zatanna, and Dr. Fate.

The heroes run from one potential answer to the apocalypse to another. Each failing in turn. The big climax of the story is for the remaining heroes to fight off the undead hordes as Booster uses his time machine to go back and save us all, but thanks to the intervention of a linear man, Waverider Booster is stopped from using time travel and disappears because his future never happened. (Think Back to the Future and the fading photo of Michael J. Fox)

Tom Taylor is spinning a masterful yarn here. Which make sense, as Taylor handles the main writing chores for the main series, so the characters and plot remain focuses and smooth. The plot flies by and Taylor wastes no time in throwing the reader right into the deep end of action, and as readers have experienced in the main series Taylor doesn’t pull punches when it comes time to kill off characters and the body count in this comic is just as high. Be ready to see some famous heroes bite the dirt.

The art duties are shared by Braga and Robertson so the art style changes throughout the issue. It is noticeable, but it does not detract from the enjoyment of the book. As much as I love Robertson’s other work on series like “The Boys” and “Wolverine”, here his style is just too messy in comparison to Braga’s much cleaner and more traditional style. I’m not knocking anyone here, just stating an observation. I will say that Robertson’s pages deal mainly with John Constantine and when held in comparison to past artists that worked on Hellblazer, Robertson’s style fits like a glove.

The rest of the creative team which consisted of multiple inkers, a colorist, and a letterer all provided the professional touch that readers come to expect from a DC title. I’d like to say more but to call these folks true professionals I think is the highest compliment they can receive. The colors were vivid and fit each scene well, the inks were flawless, and the letters and sound effects were perfectly placed. A great job all around.

It really comes down to this. If you are already reading DCeased then you’re going to enjoy the hell out of this as a companion piece or a spin-off series. If you’re jumping into this series blind, without knowledge of what’s going on, then this tale might be a bit of a confusing read, but still an enjoyable comic.