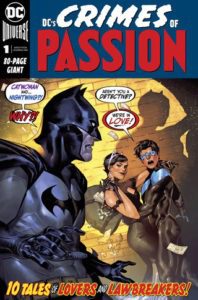 Bruce Wayne has found a level of happiness with a young woman who both loves him and shows him that there is something beyond his anger. Unfortunately, her hatred for Batman and his tactics will bring the two lovers head-to-head when a villain takes control of Bruce’s love and sends her on a mission to kill Batman. A great short story that showcases the roads and options Bruce has not traveled.

Wildcat finds himself on the hunt when a rival boxer throws a fight to protect his kidnapped girlfriend. Tracking the hoods and the kidnapped couple down, Ted reminds himself of the dangers of attachments. An ok story that really doesn’t rise above just being an ok short.

Pied Piper is called to a rich man’s mansion for an unexpected meeting. Despite his boyfriend’s objections, Hartley meets with the man and discovers he has an obsession with heroes and villains and was there when the former villain made his initial debut in the city. The man also has a very specific request for the Pied Piper. An ok story that really doesn’t go anywhere.

Green Arrow and Black Canary are enjoying some alone time when an explosion at a school gets their attention. The heroes leap into action and find a teen calling himself the Crimson Bomber torching the place. Canary and Arrow do their best to convince the kid that he doesn’t want to hurt himself and they find themselves racing the clock when he admits that there is a bomb in the school. Boring and derivative.

Eel O’Brien remembers his old days when he finds himself at an old haunt and sitting across from an old flame. Unfortunately, this former lover needs the help of Plastic Man is she is going to escape the clutches of the mob boss who keeps her on a tight leash. A good story with an entertaining mix of tension and humor.

Out of the Past

Batwoman and Maggie Sawyer team up to track down Nocturna as she attacks people across Metropolis. When the detective finds her latest victim, the villain attacks and reveals some dark secrets Batwoman has been keeping from her former love. A good story that has a personal feel for the characters.

Sam Bradley finds that he can’t resist the most dangerous woman he’s ever faced in his life. After telling Batman that he will finally bring her in, he meets his old nemesis at a local bar and the two relive their old affair over a dance. When goons of the Penguin show up to take her down, the pair discover that they have a few moves left. A really fun and engaging story that I wish was longer.

Nightwing is tracking down a young boy who was sold to a gang by a family member. After finding the boy’s location, he finds himself captured by the gang leader as he hopes his call to Barbara doesn’t go unanswered. The heroes also find that they have other things they need to deal with. One of those is the status of their relationship. Well-paced and fun story.

Catwoman finds herself in the middle of a marital tug of war over the family heirloom Selina has been hired to steal. When the duo each tries to hire her to steal the item from the other, Catwoman tries to find a weary to bring these two back together. A funny story with comparatively low stakes.

Reflections of the Heart

The Question stalks a would-be assassin with a personal connection to his target. A connection that speaks to unspoken love and a secret that brings the former lovers together in tragedy. An ok story that really didn’t go anywhere interesting and ended too abruptly.