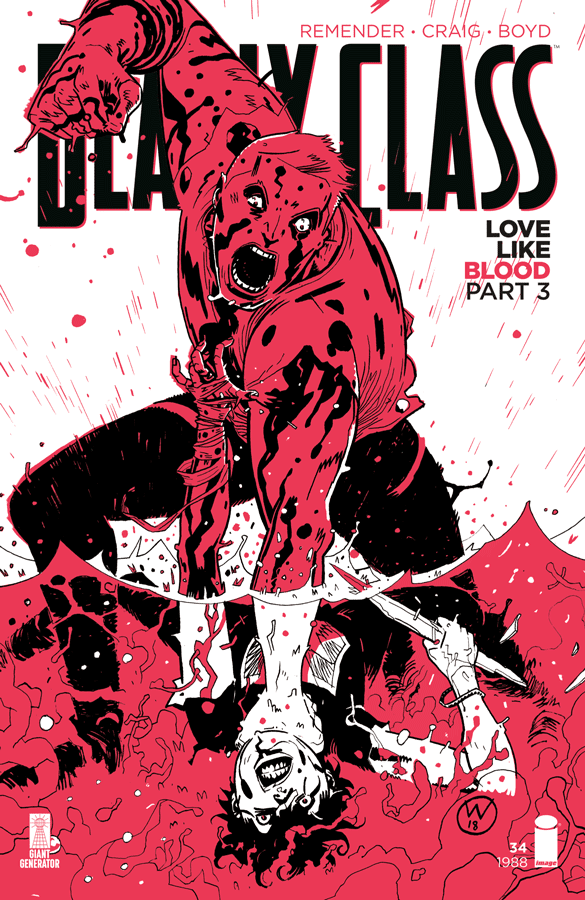 Deadly Class #34 continues bringing the action in this arc. With the freshman, Marcus, and Maria all separated from each other with the fights they each have to take care of themselves. It has certainly become probably the worst situation any of them have ever been in, and that’s saying a lot considering all of the other things they have all gone through. It did bring a big smile to my face to see Maria dawn her Día de Muertos makeup again as she decides to confront Quan on where he stands and why the Yakuza know him. She’s not playing around and this is the Maria we have all missed seeing, with so much fire in her eyes as she gets the truth on why Quan had even enrolled into the school. It’s just a matter of time to see if Quan will make the choice that works best for him or for the ones that he claims that are his friends. Like Maria though, Marcus also discovers an uncomfortable truth from Viktor as they continue to battle it out to the death. He is also given a very big choice for himself after discovering this new information. His mind is rattled, beaten, and his body is exhausted. We’re left wondering exactly what he decides to do and given how things have gone for anyone in this book, everything Is fair game to speculate on.

So much of this issue is just filled with action but when we get to Marcus and Viktor’s fight, that’s when we get some of the more deep kind of thoughts on Marcus and how he really just want’s all of this craziness to be over. The coloring here has been great with certain background colors used at times to emphasize some of the scenes actions. The paneling work he is phenomenal as it makes the action scenes flow through really nicely especially as it carries over to any concurrent pages. I don’t bring up lettering to often in my reviews but I did find it stands out really well with this issue as we read into Marcus thoughts during his fight. This is something we’ve gotten multiple times in the series but this issue is probably my favorite in just seeing how much Marcus has grown from all of this. Deadly Class tells a great story about teenagers who start off not necessarily good, but because of how they have reached out to each other. You can see here how they have made each other all the better, especially Marcus and Maria.

Have you seen this:
A Righteous Thirst for Vengeance #1 (Review)