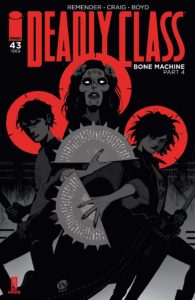 Before this week I had no idea what or who the Deadly Class was, I am glad that changed this week. From the very beginning, I was drawn to this story. In this book, we have a group of teenagers that are in the middle of a school retreat. The idea of having a group of kids stuck in a barn, in what appears to be the middle of winter, made me think of an 80’s slasher. As the story goes on you get to see these kids doing what you expect them to do, party and have sex. But just when you think you have this book figured out, Deadly Class throws mythical gods and creatures and all of a sudden it becomes that scary movie that you just knew it was going to become. 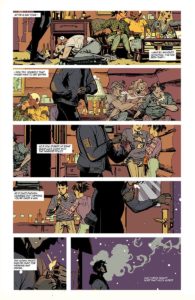 Every page is filled with a creepy art style and it made me feel uncomfortable, but not in a way that I wanted to stop reading, but rather in a way that makes me want to keep exploring this world and these characters. By the end of the book, these characters have experienced death and betrayal, you know, typical high school stuff. As I mentioned before, this was my first time reading a Deadly Class comic, but thanks to this issue I’ll be sure to check out the next issue when it releases. As an overall arc, I’m not sure how this fits in the whole picture, but as a stand-alone issue, it had enough to keep me wanting more.