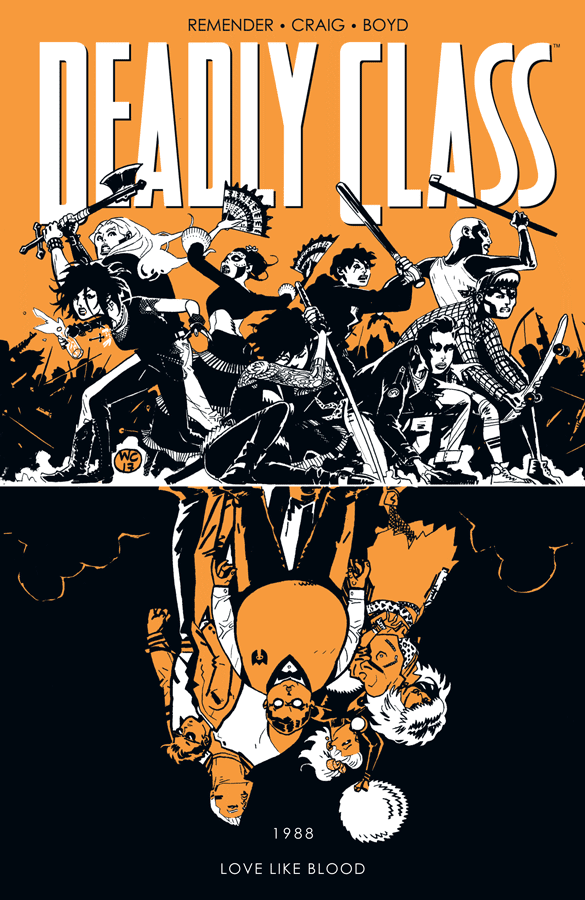 Deadly Class Volume 7 is a collection of issues 32-35 which are also the latest issues released that will get you all caught up in the series. Even though this trade only has 4 issues it is by far one of the most action packed in the series. What this trade really builds up to is a fight between Marcus and Victor. The event’s that lead to this encounter have been quite crazy and this trade begins with all of hell breaking loose as everyone is out to fight for their lives. Everyone out here is for blood while Marcus, his friends, and the freshman kids are all just wanting to get away from it all and they’re going to have to really fight for it. The action displayed throughout here has some of the best panel work and some fantastic splash pages that really get you sucked into all the madness as you’re unsure who will make it out of here alive.

We get a really great look at everyone’s skills used here such as Maria, which many fans of her will really enjoy to see what she has to give to everyone that stands in her way. Saya is also given a very-much-wanted update on her situation. She has definitely taken a bit more of the backseat with everything else is going on but I’m sure we’ll get back to her soon enough in the future. The last two issues in this trade though really do an incredible job to show how far along Marcus has come. Nothing is ever perfect for him and it sure as hell isn’t now but he has grown to become a very different person than the one we were introduced to when this comic started.

Deadly Class Volume 7 shows that it really puts everyone skills to the test and this series shows that it’s not afraid to kill off a character. Even with all the chaos occurring we’re still given some great forward movement to our characters with some great quiet moments between or even during the fights. The arc in this trade has some very great pacing and when it’s all over, you feel like you went through so much and I believe finishing this will want you to pick up the issue in its monthly format.