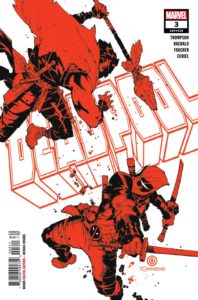 Dare I say this is the first time I’ve sauntered into the world of Deadpool? I’ve been obsessed with this character for quite some time, and have been eyeing this character to be my next comic collection. He’s sarcastic and can’t die. What’s not to love?!

Already it takes place in Staten Island which has me proud. (I’m from there!). So a sarcastic a-hole in my hometown? That’s it. It’s perfect. That’s my review.

For me, the story didn’t have much. It seemed to be more of an in-between that served as a means to show off the creatures who call 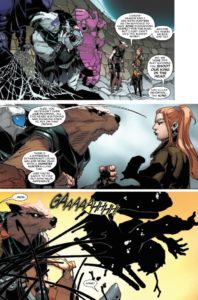 Deadpool their king. The ending is where the action took place, and I wish there was more. Again, just blabbing while kicking butt, I freaking love Deadpool! Imagine dying to sarcasm. That’s it! That’s Deadpool, and I love it!

Art wise, I’ve seen Deadpool drawn in many ways, but I quite like how he is drawn in this comic series. Not very muscular, and the mask isn’t very form-fitting. He looks like an average guy who decided to be a superhero one day just so he could show off his wise-cracking ability… and the fact he can’t die. The art style over all is a fine balance between a gritty sketchy look, and a fine-tuned look. It’s great! I was wondering while there were so many inkers for this comic, and it becomes clear when you look at this comic. So many shadows! It’s amazing that they got so many inkers to help out in making this comic’s shadows truly pop.

And that’s pretty much all I have to say. Not much happened in this issue, but if you get a kick out of Deadpool’s wise-cracks, then you get ’em in full!