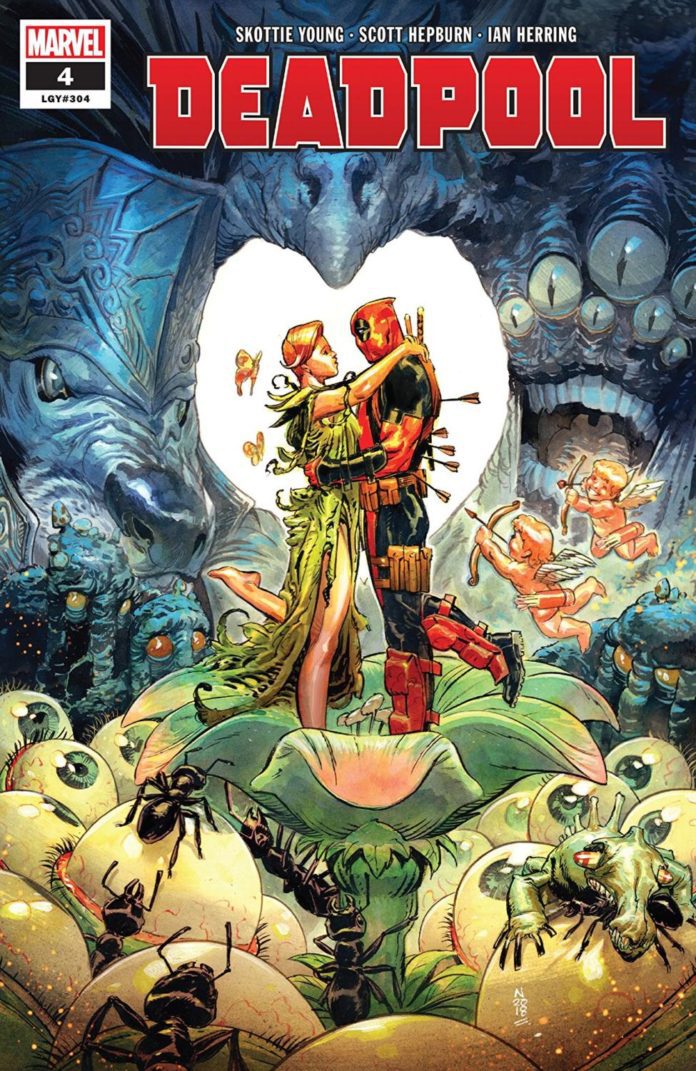 In typical Deadpool fashion, Deadpool #4 spent very little time on the actual task at hand. Instead Skottie Young focused on every single random detail that, really, has nothing to with the assignment. Deadpool pretty much went through the worst experiences Weirdworld could throw his way. But in the end, Deadpool always gets the job done. (Or he at least gets it done more often than not.)

Though, that’s pretty much how works with Deadpool. The story starts with an objective, then the middle is filled with a bunch of random action and dialogue (i.e. Cable & Deadpool Annual) and in the last page or two Deadpool accomplishes what he set out to do. That’s exactly what happened in Deadpool #4.

I found it weird at first. It felt like such a random jump from the battle with Groff and the mindwipe. But that’s how things work with Deadpool, so I guess I’m the idiot for losing sight of that.

What really made this issue for me was how Young used texting to lay out the story. Deadpool first text makes it seem like he’s been away for a decade, even though it took what seemed like seconds for Negasonic Teenage Warhead to get a barrage of text. Young perfectly puts Weirdworld time warp into perspective when Deadpool reveals he’s only had to charge his phone once. (Yet it still didn’t register in Deadpool’s mind that he may be in a place where time moves much quicker.)

My one, tiny gripe with Deadpool #4: everyone lost their minds on Deadpool when finally executes his target. I understand the character was supposed to fight alongside Deadpool in this war, but he seemed so insignificant. Definitely didn’t warrant the reaction it received.

Though, if my king murdered one of my fellow soldiers for seemingly no apparent reason, I guess I’d be upset, too. Pretty sure that’s how Game of Thrones started.