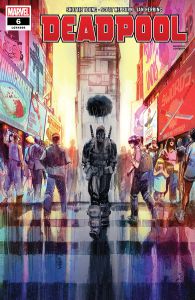 Deadpool #6 may have set the record for least amount of dialogue in a comic book featuring Wade Wilson.

Anyone who reads Deadpool knows how exhausting he can be for other characters, but that’s why we read him. We want the over the top annoying jokes and his maddening way of approaching his life and job.

So there’s never really been a reason to change that about Deadpool. He is what he is. Clearly not broken, so why fix it?

Which is why I found Skottie Young’s decision to limit Wade’s dialogue in Deadpool #6 very aggressive. But I’d say it paid off. It’s not something that should become consistent by any means — I think that’s pretty obvious.

But it works because Deadpool has always dealt with some level of disappointment or depression throughout his existence. It’s part of why he’s killed the Marvel Universe twice.

So as much as Deadpool going silent for an issue is in a way off-brand, it actually makes sense. Everyone has days where you want nothing to do with the world, yet it just will not let you have a break for two seconds.

Deadpool also met the arch-nemesis he never knew he had, Killpuddle the laughing assassin. We started at Deathstroke, moved to Deadpool and now Marvel has taken it too Killpuddle. I don’t think we’ll be seeing him again, thankfully. Seriously, if you’re jealous of Deadpool, a miserable, living scab who kills for money and is destined to walk the world alone and live forever, then you have some serious self-esteem issues.

Deadpool #6 also featured cameos from the Fantastic Four and Dr. Strange. I’m sure those characters weren’t selected by accident, though I doubt it has anything to do with Deadpool’s storyline going forward.

Lastly, I like Scott Hepburn’s style. It works well for Deadpool and his wackiness. But does Deadpool need to squint ever second he has his mask on? It’s a small change, but one I would appreciate.