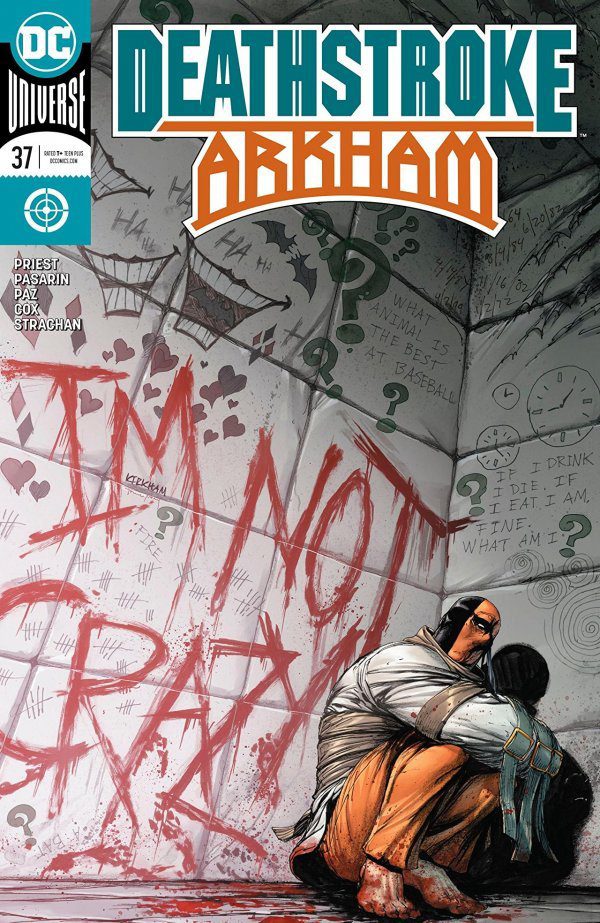 You ever like something but not fully understand why? That’s kind of how I felt about Deathstroke #37.

I went back and reread this two more times, hoping to fully understand what was going on. That didn’t help much.

The things we do know from this issue: Slade is hallucinating, Two-Face is no longer in Arkham and he has an interest in Slade’s daughter, Rose, and her split personality, Willow.

What we don’t know: what’s been done to Slade to lead to the hallucinations, who’s giving him the drugs or experimented on him, how did Two-Face get out of Arkham or was he ever really there and why did he go after Rose? (And one other unknown, though far less important, how can I get my hands on an Ikon suit? Because there’s no way Harvey Dent is THAT shredded.)

I’ve tried figuring out what the heck is going on and still have nothing.

It seems like Hugo Strange is in on it somehow, though that’s not completely clear. He did acknowledge the existence of Devon, the patient who Deathstroke “escaped” within Deathstroke #36. Strange also addresses the situation as if he was testing his theory “The best way to cure a delusion is to test it.” But why would the people at Arkham let Strange experiment on anyone?

Then there’s the matter of Dent, who, turns out, isn’t actually in the simulation with the Arkham patients. And what does he want with Rose?

Then there’s the matter of 22 days versus 23 days. I understand the lie has to do with the hallucinations, but how exactly?

Priest has done a great job making such a dominating character appear so helpless. This mind-pretzel works particularly well because of the way Priest has established Deathstroke through their entire run together. He’s always been a confident character, but flawless — at least as flawless as a paid killer can be. However, throughout the majority of Priest’s run, he’s planted little seeds of doubt here and there, to the point where this streak of insanity isn’t a reach.

There’s no reason to believe the next issue of Deathstroke will be any less confusing, but whenever the payoff comes it’ll be worth the wait.