Deathstroke #38 answers everything that’s been building up from the recent issues, including the state of Deathstroke’s mental health.

Devon, who Slade escaped within Deathstroke #36, is in fact real. And he’s dressing like Deathstroke now, which is kind of stalker-ish. Not to mention he’s going by Death Masque.

Also, Two-Face apparently escaped Arkham, knocked out Deathstroke’s son so he could abduct Deathstroke’s daughter, Rose, and take her to Vietnam to rid her of Willow. Apparently, he owes Slade, but I feel like this is a weird way to repay him.

Most importantly, and this goes back to Devon, Slade Wilson is, in fact, not crazy. Well, as not crazy as a contract killer can be. Because we found out from Hosun that he’d been feeding Deathstroke something that caused him to hallucinate young Wintergreen’s presence. Which explains why Slade can’t see him anymore.

Honestly, if Deathstroke finds out, which I bet he will, I’d be stunned if he doesn’t off Hosun. I’d think Rose, as much as her dad pisses her off, would be pissed with her precious husband, too.

Speaking of untrustworthy individuals, the good doctor, Candace, is as bad as anyone and might be a little insane. She continues her fact “good doctor” routine, which became complete BS when she tried to convince Deathstroke Arkham Asylum isn’t a bad place.

And we find out Hugo Strange is back in charge of the place and Candace is in cahoots with him.

One thing that was odd about the final image, aside from the doctor wrapping her arms around Strange, Two-Face was somehow in the image. I’m not sure if that was an accident or deliberate. If it’s an accident, how does that happen? If it’s deliberate, I’m very much confused. 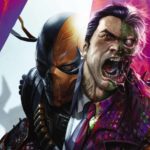