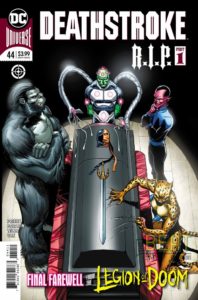 So . . . Emiko Queen actually did it in Deathstroke #43. She actually killed Deathstroke.

Any time a writer elects to write an issue without the title character, they’re taking a chance. Now, you’re not going to lose too many people in one issue, but when people pick up a book title Deathstroke, they expect loads of Slade Wilson.

The only Slade we get in Deathstroke #44 is from a flashback encounter with Superman and Jericho. That’s it.

Deathstroke’s body is present, but he’s not. Because, again, he’s dead.

As frustrating as this decision by Christopher Priest is, there are two things to keep in mind with this. He executed his decision for Deathstroke #44 very well. Personally, I feel something like this has a ceiling lower than the average comic. He hits it.

(Spoilers ahead if you haven’t finished Deathstroke #44.)

Can’t stress it enough: killing Deathstroke is a bold move by Priest. Really wasn’t a big fan of the idea. But then Priest had all the villains roll through and “pay their respects,” and he won me over. It’s funny how some of these characters really respected the hell out of him, but there were still a few happy to see him go. Why show up to his funeral if you hated him? (Looking at you Deadline.)

Jericho’s a good kid, but his attack on the Teen Titans wasn’t exactly on brand. Then Adeline, the woman who loves to make Slade’s life miserable, tears up and smashes what’s probably a very expensive monitor over his death.

More people were broken up about his death than you would think, that’s for sure. Deathstroke lived by a code, but he was still kind of a dink. Plus, assassins and mercenaries may respect a code, but most of these villains don’t abide by those rules. You’d think they would’ve been annoyed by his excellence and approach.

Speaking of excellence, looks like Rose will try to fill pops’ shoes. She’s the best fit, no doubt. But she’s not on his level.

Give her five to six issues as the main character, that’s fine, but Deathstroke needs to come back after that.

Also, Jericho’s interactions with the Legion of Doom and his emotional state lead me to believe he’ll join them and somewhere along the way, Rose (and hopefully Slade) will have to intervene.