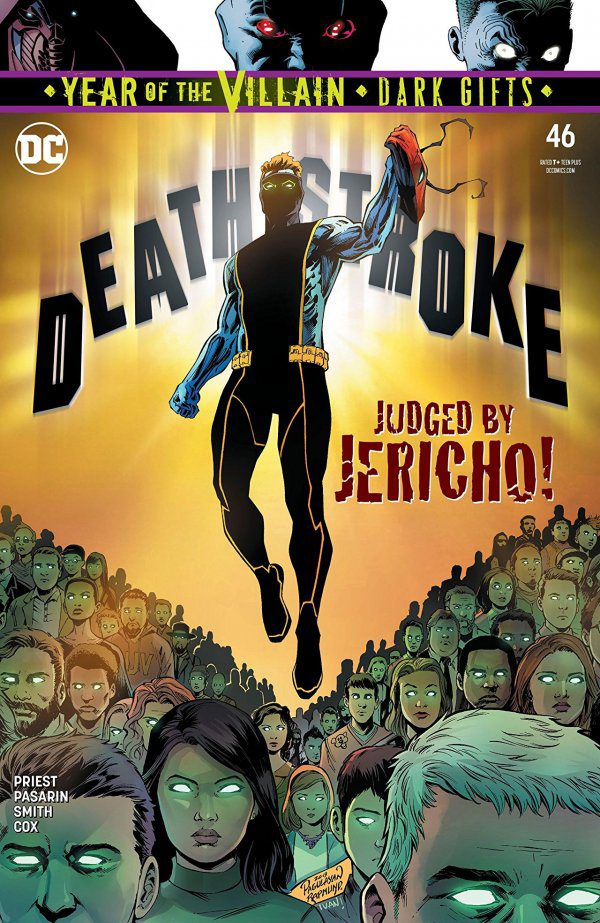 Plain and simple: too much Jericho and Red Arrow, not enough Rose and Shado in Deathstroke #46. That’s more of a knock on Jericho than Emiko. Though, neither really brought much to the table in their telepathic conversation.

Jericho’s remorse over his father’s death has already gone too far. We get it, you feel ad because you made about as stupid as a mistake as humanly possible. Obviously, Deathstroke dying isn’t exactly going to lead to too many tears from those in the DC Universe. But it’s still pretty messed up when you set up your dad to be killed.

Given his recent idiotic decision, one would think it’s best for him to sit a few plays out. Maybe let some other people make the big decisions for now, Joseph. Better yet, just take a seat for now.

Have you seen this:
hardware season one #1 (Review)

But no. Instead, he thinks it’s a good idea to take a “gift” from a weird hologram Lex Luthor, who’s supposed to be dead. What could go wrong?!

Going back to his remorse, it’s just hard to imagine beset up his father to be killed and is all pouty about it now. We may be dealing with metahumans and whatnot, but, to me, it doesn’t exactly seem believable for someone who orchestrated the death of a relative to then make a 180 and show so much remorse.

Although, you could argue someone who plots something that sinister isn’t exactly stable.

Either way, Rose seems much more like her Slade. Definitely more emotional than Deathstroke, but she has that cutthroat edge. Had a great battle brewing with Shado until Jericho ruined it.

And it looks like Rose got some new Deathstroke gear. That’s, of course, assuming that’s her on the last page of Deathstroke #46. The dual swords look sick. The whole outfit does. Hopefully we get more from her in next issue. Though it seems likely Deathstroke #47 will still be Jericho-heavy, given what we saw him do to Rose and his lover, Terrence. (No to mention what we saw on Ed Benes, Richard Friend and Dinei Ribeiro’s cover.)

Have you seen this:
Wonder Girl #2 (REVIEW)