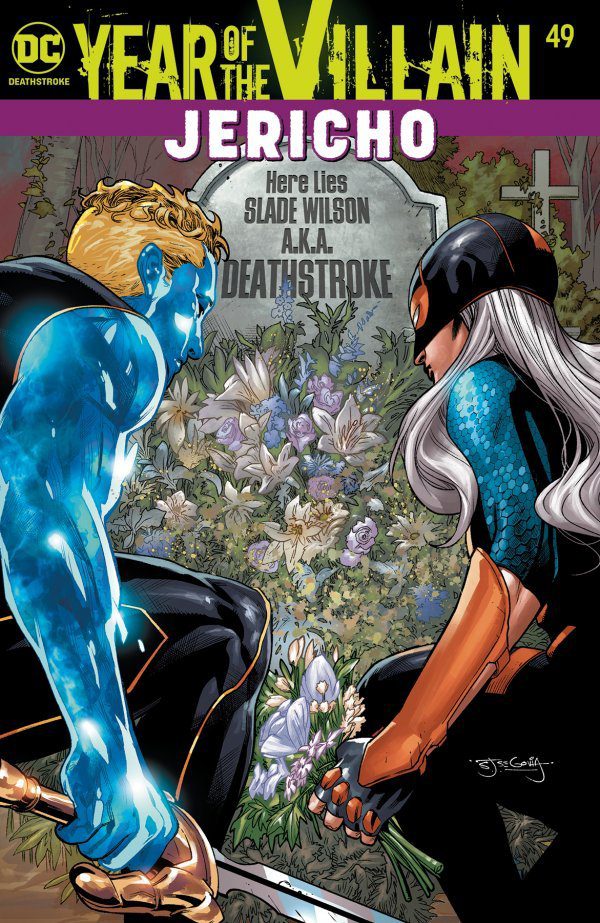 (WARNING: Spoilers for Deathstroke #49 ahead.)

This is the first time I actually enjoyed Jericho’s contributions to an issue of Deathstroke. Go figure his strongest performance came in the penultimate issue, Deathstroke #49.

He’s always come across as a character who’s willing to make the ultimate sacrifice at any minute, when, in reality, he as no intention of putting his neck on the line to that extent. In simpler terms: Jericho has a self-righteous arrogance about him. But, you have to give it to the guy, he backed it up this issue.

Now, I’m still a bit confused by what Jericho did at the end of Deathstroke #49. It’s unclear if his monologue is before brought the male Deathstroke in the space or after — and his melting body was simply and illusion. I tend to think it was the latter, but it was still a bold course of action.

And I wonder if Jericho knew his real dad was alive by the time he made his move. He expressed he wouldn’t need to kill his fake dad. Why’d he think that? Obviously, the real Slade showed up at the very end and is about end this phony, but how’d Jericho know? Was it his enhanced powers? I’d love an answer to this.

Christopher Priest has one more issue to put a bow on this thing — which is both great and awful. Deathstroke has been outstanding under Priest, but all good things come to an end — and I will say, it’s nice to see something good end before it goes south. There were moments I was worried about this title as Deathstroke #50 came closer, but Priest clearly knows Deathstroke and his family better than anyone.

Can’t wait to see how he concludes Slade Wilson’s story.