Deformers, a title coming from Ready at Dawn, the same company that developed Okami for the Wii and the Order: 1886 for the Playstation 4, has released it’s multiplayer madness on PC, Playstation 4, and Xbox One.

The object of the game is to shoot, hit, bounce, or throw other balls into oblivion. There are 3 play styles for players to enjoy: deathmatch, team deathmatch, form ball (their take on soccer).

The game doesn’t support more than eight players at once in the small arenas, but offers plenty of action as you maneuver your ball of silliness around obstacles and into other players. 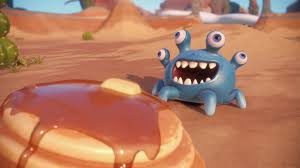 The truly masterful piece of this game is not in it’s features, of which we have nearly discussed in total; it is in the simplicity of it’s gameplay. While many games are seeking to put a balance of power in how characters are allowed to be built and what powers are able to be played that still give seemingly endless choices in play style, Deformers only uses 3 builds: Guardian, Striker, Ranger, Speedster, and Marksman. Each name implies it’s intended playing style; simple and to the point. There are no powers to be gained, though there are a handful of useful boosts in game. Mastery of physics and timing are your only allies against the inevitable destruction of your tiny ball. 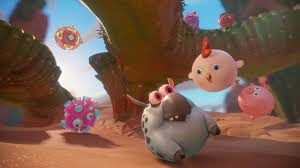 A token economy does exist in-game, but only buys new skins for your ball or accessories that your ball (called a ‘form’ in game) can wear. The skins are pretty awesome. I ended up playing for several hours in order to get the shark skin….it’s great….I’m a shark. There are tons of skins to choose from; most are some sort of mundane animal or object that really looks hilarious when smooshed (is that a real word?) or when bounced or when flying through the air.

As interesting and fun as it is, at the MSRP of $19.99, there may not be enough in gameplay to hold players’ interests. It instantly reminds me of Rocket League, but with one distinction: a point. Rocket League allows players to play an entire season of RC soccer, while Deformers lacks any semblance of story. If the price were lower, it would be a fun game to play casually with friends when nothing else sounds good, but would be a difficult sell outside of that.

If I were to assign a number score to this one, we’d have to go with 7/10. Not a bad way to spend a few hours, but ultimately, for the same price there are plenty of better ways to spend your Saturday.

Major thanks to Ready at Dawn for allowing us the chance to play.